In order to fully evaluate the positive and the negative impacts of biofilms on society, it is important to understand the underlying mechanisms that control their structural and functional stability. To achieve this, it is fundamentally important to study interactions between the chemistry of the microbial cell surfaces and that of the polymers in the extracellular matrix. For instance, the interaction between the positively-charged proteins in the extracellular matrix and the negatively-charged bacterial cell surfaces helps stabilise biofilms.

It is challenging to design active strategies to modify (enhance or reduce) biofilm stability, as a comprehensive understanding of the chemical moieties in a biofilm and their interactions is lacking predominantly due to limitations in the available experimental techniques to non-destructively study the chemical fingerprint of a biofilm.

Raman micro-spectroscopy (RMS), which is a non-destructive technique has been employed to study biofilms. It is used to identify the microorganisms contained within the biofilm or for studying the diffusion of antimicrobial products within the biofilm or for obtaining the average chemical spectrum of a biofilm. The confocal capability of RMS allows depth profiling of a biofilm at a resolution of 1 µm.

Acinetobacter sp strain 1 grown on quartz slide for 48 hrs and Depth profiling by collecting Spectra at each micron depth until biofilm signal stops.

Breast cancer is increasing worldwide, with the highest rates reported in affluent western societies (the risk ratio is approximately 1 in 8 to 1 in 12). According to the latest data from Cancer Research UK, it accounts for 12,471 deaths per year in the UK. The lifetime incidence is 9% and average incidence is 65 per 100,000 persons per year.

Techniques used in the detection of breast cancer include mammography, ultrasound, fine needle aspiration cytology (FNAC), and magnetic resonance imaging (MRI). However, these methods have significant limitations and inaccuracies.

Our research at Lancaster University employs vibrational spectroscopic techniques, such as, Infrared and Raman, which have emerged as a powerful tool for biomedical applications and has made significant progress in the field of clinical diagnosis.

Raman spectroscopy can provide details of the chemical composition of tissues. These are non-destructive techniques requiring no sample preparation, making it an attractive method for in vivo and in vitro characterization of biological tissues.

We identified chemical structural changes associated with different subtypes of breast cancer cell lines based on tissue information using Raman spectroscopy (RS), which is a potentially non-invasive and label-free technique.

Raman spectroscopy is an advanced chemical analytical technique that has gained significant interest in cancer research, in particular in the early detection and monitoring of cancer, with advantages of being a non-invasive and real-time diagnostics. Recently, studies have shown its sensitivity to monitor chemical changes during cancer progression. This information will lead to the identification of chemical markers (molecular fingerprints of chemical composition) that can be used as biological markers.

We used a tumour spheroid model that mimics the characteristics of a nonvascular in vitro tumour model, with a combined Raman and multivariate approach to identify chemical changes associated with normal proliferating, hypoxic and necrotic regions of T-47D human breast cancer spheroid model. The results provide evidence that lipids, amide I, III and nucleic acid contents differ significantly in normal, hypoxic and necrotic regions. PCA loading plots suggest that normal proliferating region separated with low amide I and high tryptophan content, compared to the hypoxic and necrotic regions. These differences observed in three regions could be used in the identification of new spectral markers associated stress faced by each region progressing towards necrosis. 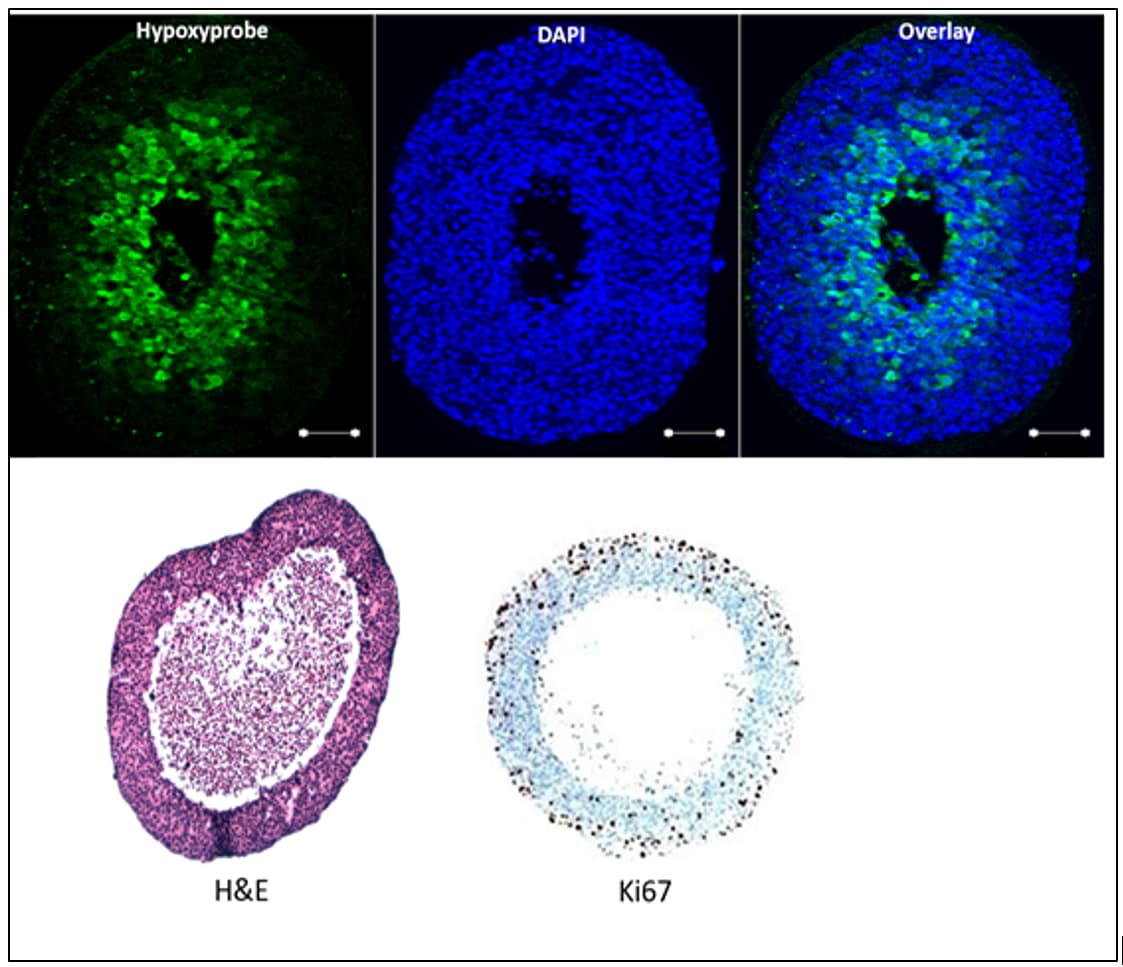 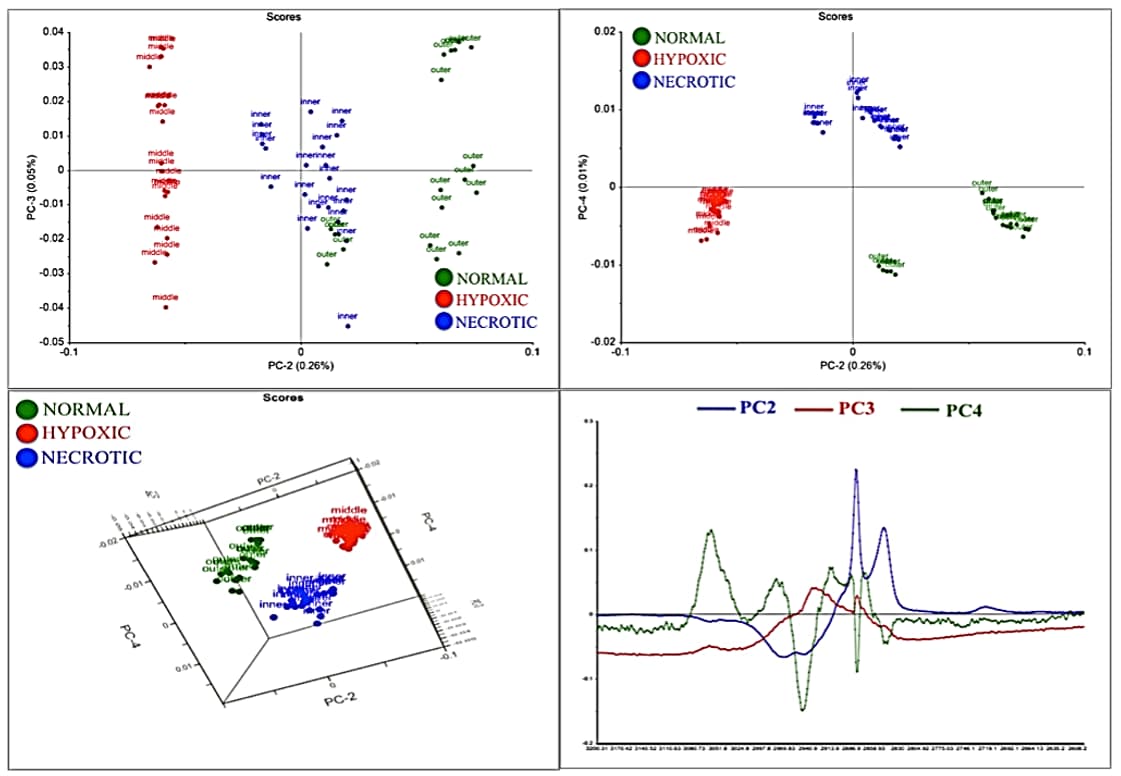 Any human biofluids, such as sputum, saliva, tears, urine and semen can be analyzed by vibrational spectroscopic techniques. Vibrational spectroscopy can provide key information on the molecular properties of a sample without destroying or altering it. Since the molecular features of proteins, carbohydrates, nucleic acids, lipids, and metabolites will vary depending on the nature and composition of the analysed sample, this information will be unique to that sample behaving like a molecular fingerprint. The systematic and comprehensive comparison of molecular fingerprints between subjects with a specific pathology (and their healthy counterparts) is likely to highlight key differences, which may have clinical potential as diagnostic and/or prognostic markers of disease. Biological samples of different forms with a diverse range of spectroscopic analytical platform to detect various biomarkers through spectroscopic techniques in larger, prospective and more ethnically diverse population can be utilized in clinical practice.