Senior Lecturer in The Theory and Methods of Social Futures

My work explores the relationship between cities and infrastructure through what I call a 'past futures' approach. I have studied cities like London, Paris and Shanghai, using history as a means of thinking about what theories and which methods are relevant to understanding their future today, including how we can relate it to competing visions of the future in the past. I am interested in research that is comparative and collaborations that combine disciplinary rigour with cross-disciplinary openness.

Before coming to Lancaster (in 2015), I was a Lecturer and Research Fellow at the School of Advanced Study, University of London where, among other things, I taught in the MA in Understanding and Securing Human Rights and led the AHRC-funded project Reconfiguring Ruins. Between 2010 and 2018, I was convenor of the Metropolitan History Seminar of the Institute of Historical Research which is part of the same School.

My studies and academic career have taken me across disciplines (architecture, human geography and history) and continents, from Cali (Colombia), where I was born, to Amsterdam, Berlin, Paris, London, and Shanghai.

I have convened/taught LICA420, Design Research Methods, which invites students of the MA's in Arts Management and Design Management to develop their own research projects under the umbrella of I 'app' Lancaster. Final project portfolios have ranged from bike sharing schemes to the social life of pubs and sustainable packaging for take away food, all using Lancaster as their laboratory.

I also convene and teach LICA200 Critical Reflections, LICA's 2nd-year core module open to design, fine art, film and theatre students, whose key aim is to introduce a selection of concepts and theories to analyse, engage with, and reflect upon art and creative works in a variety of fields and contexts.

An important part of my work explores the relationship between cities and infrastructure from a 'past futures' perspective. I have done this by considering what visions of the future of cities like London and Paris have emerged in the past and the role that railways have played in the process. This is the main subject of the monograph Cities, Railways, Modernities: London, Paris, and the Nineteenth Century (Routledge, 2019). As an active member of international research networks and organisations such as T2M, and through the work of UKRI-funded projects like GREAT, I study the different ways in which we can historicise key themes and trends, in particular, urbanisation, informality and sustainability.

Two other areas of interest are ruins and utopias. In relation to the former, I led the AHRC-funded project Reconfiguring Ruins (2015-16), which partnered with the Museum of London Archaeology and the artist-led New Bridge Project in Newcastle, to explore ruins in light of their materiality, the processes underpinning their transformation, and the mediations (photographs, films, literature) that precede our encounter with ruins. More recently (2018), I co-chaired a panel on Beyond Ruinenlust at the conference of the European Association for Urban History, which brought together classicists, medievalists, modern historians, planners and a literary scholar to think about how we can move beyond the aesthetic, often objectifying, gaze implicit in the romantic notion of Ruinenlust.

My interest in utopias has local roots. Back in 2010, I joined a diverse group of practitioners, artists, and academics who came together for a week or so to take part in 'ReVisioning Utopia: Barrow by Design'. This was organised by Art Gene, the artist collective based in Barrow in Furness, Cumbria. The idea was simply to join forces and envision the Barrow of the future, tackling acute problems of social exclusion and taking into consideration the stunning landscape that follows the northwestern part of the Morecambe Bay. I follow the important work that Art Gene continues to do in the area and have discussed ideas for collaborative (utopian) projects with them in the future. Other work on utopias was the AHRC-funded collaborative project 'Mobile Utopias: 1851-2051', led by Nick Dunn, which, among other things, asked Lancaster residents to tell us about how they envisioned their lives in 2051. In 2017, Lancaster University hosted the international conference 'Mobile Utopia: Pasts, Presents, Futures', which was the common effort of the Centre for Mobilities Research, the Institute for Social Futures, the European network Cosmobilities, and T2M, which is the International Association for the History of Traffic, Transport and Mobility. Monika Buscher (Sociology) and I were co-chairs of the conference. See the special issue of Mobilities vol. 15, issue 1 (2020).

I welcome proposals in any topic that speak to the broad areas of history, urban studies, and arts and heritage. I encourage proposals that are comparative, engage in a dialogue across disciplines, and have an international dimension. In particular, I'd be keen on discussing projects that explore the relationship between history and the future. Current projects I supervise include: Georgia Newmarch, ‘Infrastructuring’ Power: Blackouts, Breakdowns and Social Futures

International Association for the History of Transport, Traffic and Mobility (T2M) (External organisation)
Membership of committee

Violence, health and everyday (non)life: Gaza and beyond
Participation in conference

The Past Futures of Cities and Mobility: A View from History
Invited talk

The Past Futures of Cities and Mobility: A Humanist View
Invited talk

The pursuit of global urban history
Participation in conference

Memories of the Future 2
Participation in conference

Futures of a Complex World
Participation in conference 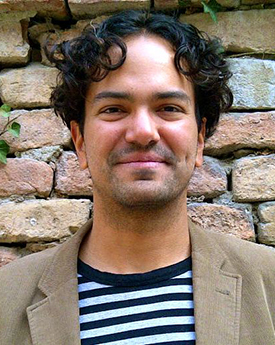