Lancaster University's Waste & Recycling Strategy was adopted in 2011.  The projects and actions implemented as elements of the Waste Strategy have resulted in significant improvements in recycling rates and major reductions in carbon emissions associated with recycling and waste disposal. Recycling rates have improved from 7.5% in 2006-07 to 76% in 2013-14.

Lancaster University’s Waste and recycling performance has improved significantly in recent years with recycle rates improving from less than 7.5% in 2006-07 to 76% in 2013-14.

Around 2% of the waste generated at Lancaster University is segregated for re-use. Typically this includes furniture, electronic items, white goods and unwanted items at the end of term. This is done via our Exodus Project, run by Green Lancaster

Over 60% of waste is recycled, 22% is segregated on site for recycling and the remainder separated at off-site treatment facilities. This includes card, paper, plastic bottles and metal cans and mixed glass.

Recovery of up to 30% of waste (primarily biodegradable materials) is anticipated to commence soon. This material will be separated and treated at a specialist off-site treatment facility to produce an organic soil type material, suitable for forestry use.

The remainder of waste around 45% is disposed of to landfill. Significant reductions in waste disposal to landfill are anticipated in the next few years as re-se recycling and recovery rates improve.

Internal segregated recycling bins have been installed in office, administration and teaching areas across the campus.

Bins are segregated to collect paper, newspaper and magazines and plastic bottles and metal cans as well as general waste.

All student residences have three stream kitchen recycle bins installed. The bins can take newspaper, magazines & card, mixed glass and plastic bottles and metal cans. Residents are responsible for transferring recyclates from their kitchen bins to the external bin stores.

External bin stores are conveniently located across campus. All bin stores have general waste bins and virtually all have green segregated recycle bins for card, paper, newspaper & magazines, mixed glass and plastic bottles and metal cans. Look out for dark green card skips rather than bins in the larger bin stores.

Please do not put disposable barbecues, lighted cigarettes or other sources of ignition into waste or recycle bins in the external bin stores. Disposal of these items has caused serious fires. Please use the marked barbecue bins located close to the fixed barbecue stations. 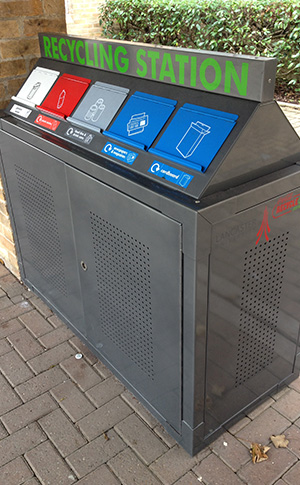