An exhibition of ‘Chris Orr's John Ruskin’ (1972), a set of ten etchings, alongside related works and other prints and drawings by the artist.

Chris Orr (b. 1943) studied at Ravensbourne and Hornsey School of Art. In 1967, he graduated from the Royal College of Art with an MA in Printmaking. He then became a full-time artist, combining teaching with joint and individual exhibitions, and showed work regularly at the Jill George Gallery in London. He has had many one-man shows in countries across the world including Britain, France, America, Australia, Japan and China. In 1995, he was elected a Royal Academician, and in 1998 he became Professor of Printmaking at the Royal College of Art. A Fellow of the Royal Society of Painter-Printmakers, he lives and works in Buckingham and London.

‘Chris Orr’s John Ruskin, and other stories’ was the third exhibition by a contemporary artist to be held in our Museum. Exhibited works included Orr's suite of lively and inventive etchings named Chris Orr's John Ruskin (1972), an imaginary interpretation of Ruskin’s life which had only rarely been shown in its entirety.

Related prints and drawings were also shown, including a Ruskin-inspired print from Orr's stay at Brantwood, Ruskin’s home in the Lake District. The rest of the exhibition was devoted to other thought-provoking, humorous and subversive subjects from a prolific output of prints and drawings, often on a large scale, including Bones (1988), an amusing take on the Oxford Museum of Natural History, and another literary narrative, The Life of W. Blake (1992). 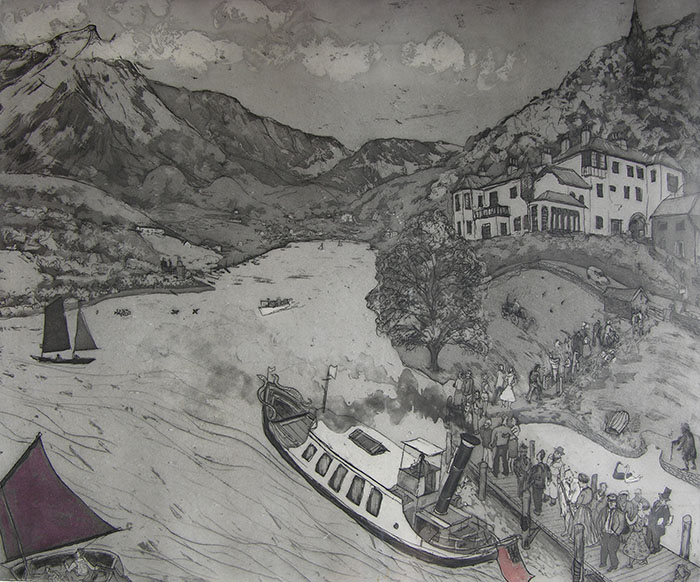 Chris Orr: A party of Ruskinians disembarks at Brantwood, watched by the ghost of the old man himself