This vivid exhibition explored the exciting tour of Italy and France that John Ruskin experienced as a going-on-21-year-old. 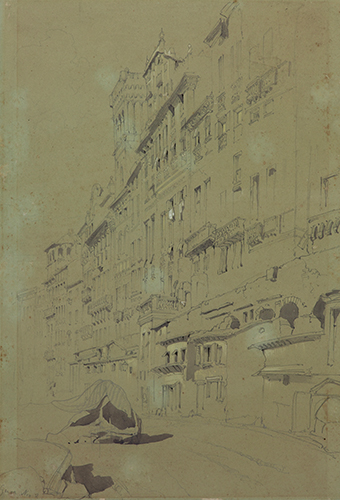 In early 1841, John Ruskin was turning 21 in the midst of a scenic tour through Italy and France with his parents and cousin, Mary Richardson. They had set off from England in the autumn of 1840, after being encouraged to go by a doctor (the well-respected Sir James Clark) who insisted that Ruskin needed a break from studying for the sake of his health. The Ruskins’ journey from Nice along the coast into Italy was memorably uncomfortable, enduring bad weather and poor accommodation. In Praeterita there is a comical account of dragging the carriage across a flooded stream with Margaret Ruskin inside, having refused to get out and be carried (Library Ed., 35.266). Overall, this grand tour lasted almost 10 months and covered roughly 5000 miles. Working their way along the west coast of Italy, through Genoa, Lucca, Pisa and Florence, the family spent December in Rome before moving on to Naples and Salerno in January of 1841. After venturing to Rome in March, they began the return journey: through Florence once more, up to Venice, veering west through Milan and Geneva, across France through Calais and eventually back home to England in June.

This exhibition brought together a visual account of the architecture and landscapes Ruskin encountered on these travels as he was ‘coming of age’, both literally and as a draughtsman.