John Ruskin's drawings and watercolours from his travels 'on home ground' in England and Scotland.

The depictions of French cathedrals, Venetian palaces and the Swiss Alps by John Ruskin (1819-1900) are rightly admired, but from an early age, he also produced drawings and watercolours back home in England and Scotland.

Among Ruskin’s earliest surviving drawings is a series of maps, copied from books at the age of nine. This Map of Scotland is one out of five in the collection. He was always fond of maps, which appear in many of his books, and recommended them to students in his second drawing manual, The Laws of Fésole. 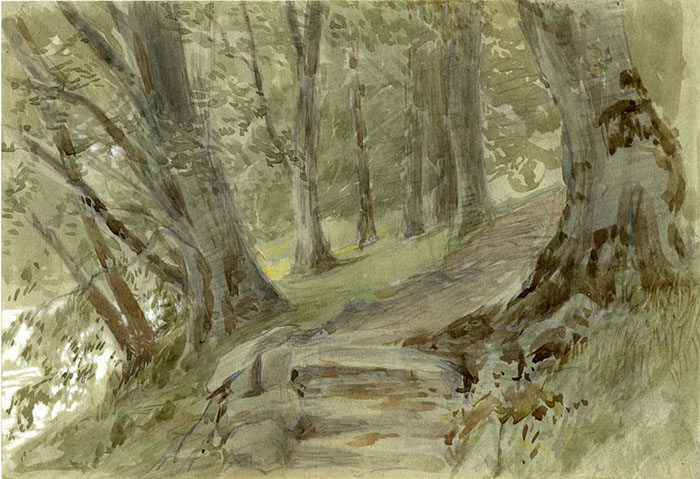 John Ruskin: Path at Brantwood - identifiable as one of the paths running steeply up immediately behind the house, allowing a glimpse of the lake through the trees below

This display includes a variety of John Ruskin's work: some of his very earliest drawings done in Kent, when he was less than twelve years old; examples from early tours to Scotland and the Lake District in 1837 and 1838; others from his student days at Oxford and later occasional travels; and those made in and around Brantwood, his house near Coniston, after he settled there in 1872. At home in Brantwood, Ruskin’s concentration was chiefly on writing, his drawings made there focusing more on botany and geology than on the surrounding landscape. Two late sketches included in the exhibition, Sandgate and Seascale, show that even in physical and mental decline the urge to draw never quite left him. 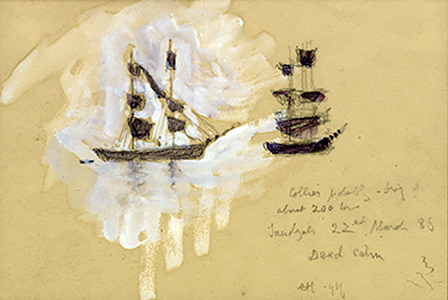 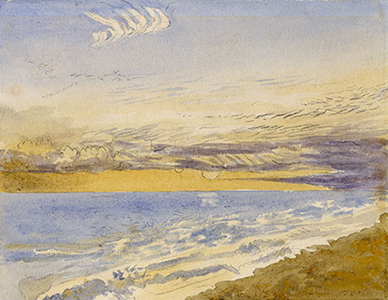 "I love Scotland, I love the sight and the thought of the blue hills, for among them I have passed some of the happiest days of my short life."