Frank Pearson, PhD student at Lancaster University, presents his research on the mobilities of caving.

Caving has its origins in mining and cave and karst science. It has been synonymous with the term speleology: the exploration and study of limestone caves, and, as such, the literature it has generated is largely of a geomorphological nature. Relatively little has been written about the aesthetic experience of caves, even less about the embodied experience of moving through them. When cave writing really began in the eighteenth century, most writers described the cave but not their presence in it. However, a few writers did attempt to convey their movement and position in space. The space they passed through was measured by their bodily experience, for example, whether they could actually fit, whether there was enough space to breathe in flooded passages, whether they could crawl either flat-out or on their hands and knees, and whether or not they could ascend or descend open spaces, such as deep shafts. Contemporary writing still tends to overlook the embodied experience, the movement, the flow-state of passing through a cave. Archaeologists and art historians have suggested a degree of altered states of consciousness in the origin of paleolithic cave paintings brought about by movement through the cave and its inherent darkness. It is this movement, along with both the sensory intensification and deprivation they describe, that I am interested in exploring in a phenomenology of caving.

This presentation was given during the event ‘CeMoRe Showcase and Lunch‘.

Joe Deville is a Lecturer in Mobile Work, based jointly in the Department of Organisation, Work and Technology and the Department of Sociology. He is a co-director of the Centre for Mobilities Research, an Associate of both the Data Science Institute and the Institute for Social Futures, an editor and co-founder of the Charisma Network, and an editor at Journal of Cultural Economy. 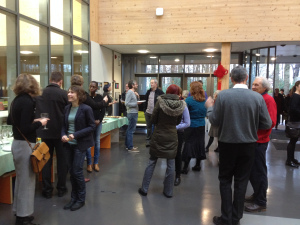 A Taste of Mobilities Research