© Photo by Markus Winkler on Unsplash

While the furlough scheme continues to buffer employment levels, our analysis of the latest labour market data finds things are more turbulent than they might at first appear. The last three months of 2020 saw an increase in the number of unemployed, discouraged and temporary workers, which in combination indicate growing slack in the labour market. Vacancies, although slowly recovering in most sectors, remain 26% below their 2019 levels, with some sectors, such as hospitality, particularly affected. These figures point to a challenging landscape for workers and businesses, which may worsen as we start to see the effects of the third national lockdown over the next few months.

Unemployment rose this quarter by 121,000. It now stands at 5.1%, which represents an increase of 457,000 compared with the same period last year. Although job losses have been more concentrated among younger workers, the largest relative increases in unemployment are found among workers aged 50-64, for whom unemployment has increased by 55% (141,000) since last year.

However, these unemployment figures only provide a partial picture of upheaval within the jobs market. The number of older workers who are inactive, meaning they are neither working nor looking for work, has risen by 110,000 over the course of 2020. This age group accounts for a large share of the overall increase in inactive workers, which was 187,000 in the October-December quarter compared with the same period last year.

As has been the trend with previous economic crises, the number of temporary workers is on the rise, up by 110,000. Although temporary workers are a small proportion of the labour market, the past year has seen this increase from 5.1% to 5.6%. It is particularly worrying that the share of temporary workers who indicated they could not find permanent employment has also increased, from 25% to 29% over the same period. This is something to keep an eye on as the year progresses - while temporary arrangements can provide employers and workers with much-needed flexibility in a challenging landscape, they can also cause deep financial and job insecurity for some workers.

We are not yet seeing a meaningful recovery in job vacancies. Although there was a small uptick between November 2020 and January 2021, increasing by 64,000 on the quarter, vacancies are still 26% below the same period last year.

There are very stark differences in vacancy rates between sectors, highlighting the differential impact of the crisis. For example, the Nov-Jan period saw a slight recovery in the number of vacancies for retail (+13,000). Professional, scientific and technical activities saw the biggest increase on the quarter, with 18,000 more vacancies. However, vacancies in food and accommodation services (hospitality) are still declining, with 11,000 fewer vacancies on the quarter. Overall, vacancies in this sector are down by 75.6%, compared with the same quarter in 2019. 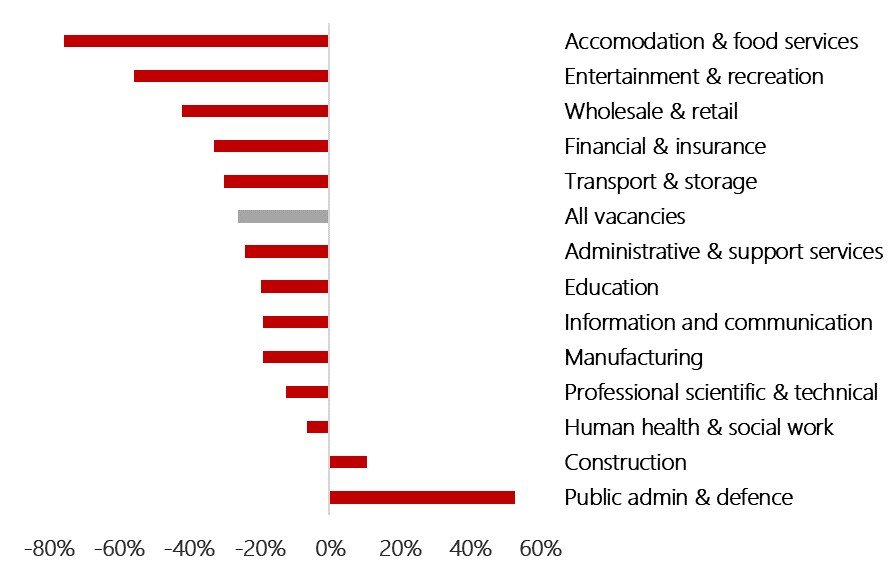 There are signs workers are really feeling the lack of opportunities. Looking at reasons people give for being economically inactive, the number of ‘discouraged’ workers, meaning those who are out of work, but not looking for work because they believe no jobs are available, has more than doubled over the past year. 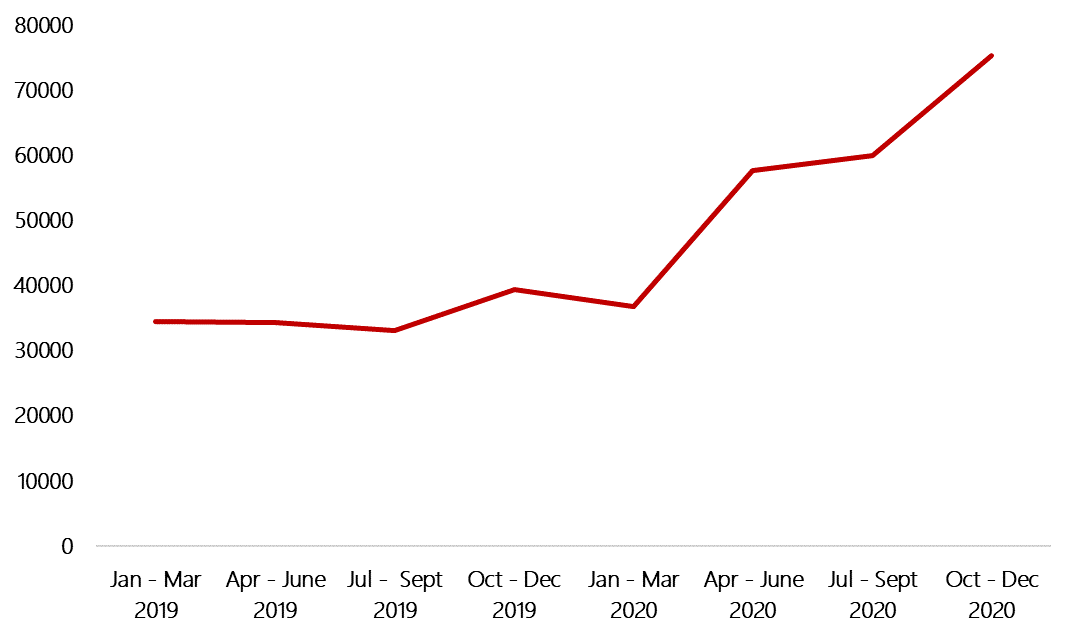 While yesterday’s roadmap is a positive beginning to the end of restrictions, it is important to note that the announced reopening of the economy on the 21st of June will not be an immediate return to normal. Instead, we are likely to see very gradual changes in consumer behaviour beyond full vaccine rollout, indicating that sector-based interventions may be needed as part of the government roadmap out of lockdown.

Exemplifying this, Kate Nicholls, CEO of UK Hospitality, has highlighted the difficulties faced by the sector in reopening last summer hospitality businesses, noting it took 10 weeks to build up to 70% of premises open with just 60% customers returning, and the sector was not forecast to break even until December.

As a result, it is vital that support measures such as furlough remain in place for as long as they are needed, so that workers and employers do not face a cliff edge as restrictions are eased.

Increases to Universal Credit payments should remain in place, and eligibility for the Lifetime Skills Guarantee should be widened to maximise access for workers on low pay and in insecure employment. In addition, support for those sectors worst affected by the pandemic and where demand is unlikely to immediately return to pre-pandemic levels - such as retail, hospitality and leisure - should be prioritised.