This month’s labour market statistics show positive signs, with the number of payroll employees continuing to increase, unemployment among young people decreasing and vacancies continuing to hit record highs. However, these broader headlines mask the challenge of worker shortages in some areas of the economy and competition for jobs in others, with particular challenges for the long term unemployed and new entrants to the labour market.

This month’s HMRC PAYE data covers September, the final month of the furlough scheme. The number of employees on payroll increased by 207,000 over the month, raising this over pre-pandemic levels (February 2020). This, coupled with decreasing unemployment, is a positive indication that those who were still furloughed in the last few months of the scheme are going back to their jobs and there are opportunities available to those who lost jobs during the crisis.

Despite these positive signs, challenges remain. Although the number of those who are out of work and not looking for work decreased in June-August compared to the previous quarter, there were nearly 350,000 more economically inactive people in June-August than there were pre-pandemic (December-February 2020). The majority (75%) of this rise is explained by people taking up full time education, delaying entry or re-entry into the labour market. These students will enter the labour market in the wake of the pandemic, and it remains to be seen how well they will be able to access good quality, secure jobs in the context of strong growth in temporary work and a record number of vacancies in predominantly low paid sectors.

Temporary work provides flexibility, but can be detrimental to workers’ longer-term prospects

Over this quarter the number of temporary workers increased by 6%. There are now nearly 1.7 million people in temporary work, which is 200,000 more than there were before the pandemic. Temporary work can provide important flexibility for businesses who are only just resuming activities and may still be facing uncertain consumer demand. However, it is important that this trend does not continue beyond the crisis, because of the potential negative long-term effects it has on workers’ pay, access to training and development, career progression and likelihood of obtaining permanent work. It is therefore important that government balances businesses’ pandemic-related need for flexibility, with the need for a longer-term strategy to stimulate the growth of secure, good quality jobs through the recovery.

Figure 2: Change in temporary work in June-August 2021 compared with the previous quarter and December-February 2020 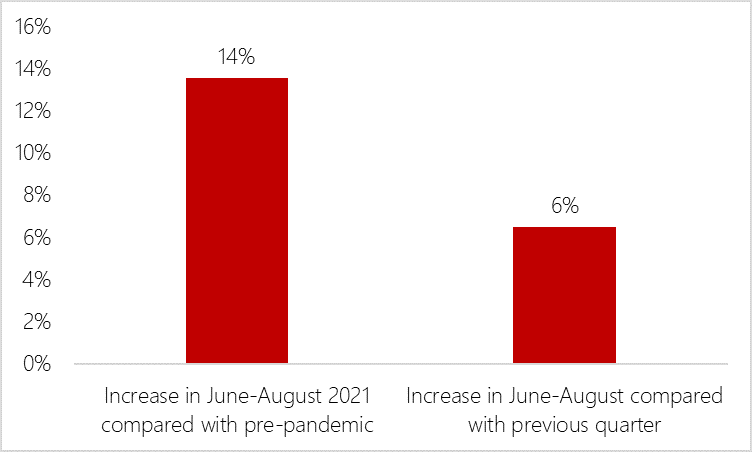 Vacancies are at record levels, but it’s not necessarily easier to find a good job

Job vacancies reached a record high of nearly 1.2 million in September. Across all industries vacancies were equal to or above their pre-pandemic levels, with the largest increase in accommodation and food service activities, up by 49,700 vacancies (+49%). 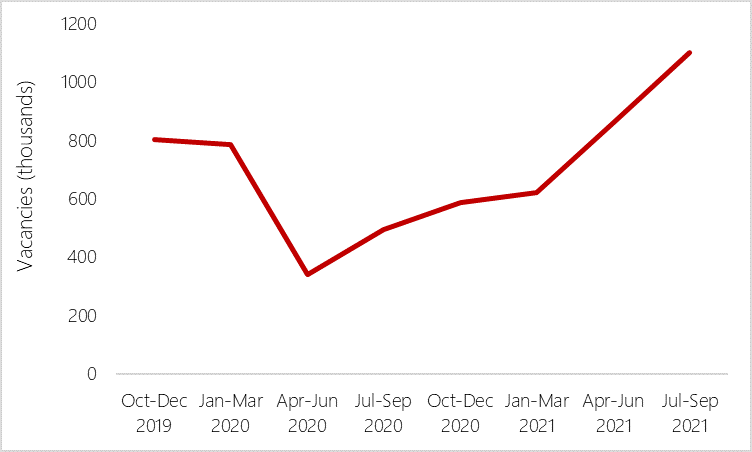 Despite this high number of vacancies and reports in the media around worker shortages, there are signs of a structural supply and demand mismatch.

As we noted last month, not all of these vacancies will necessarily translate into jobs, or indeed into secure and well-paid opportunities. This is particularly important to highlight given the continued increases in temporary employment seen in the data this quarter.

Furthermore, according to recent IFS analysis, the mix of jobs being advertised is not the same as it was before the pandemic, and is concentrated in specific sectors including road transport and hospitality. But for the majority of unemployed workers trying to find work in other sectors, competition for jobs is actually greater than before the pandemic.

Going forward, Government should prioritise supporting young people entering the labour market for the first time, as well as those re-entering after experiencing long-term unemployment, by taking a more ambitious and longer-term approach in its Plan for Jobs.

Chancellor Rishi Sunak announced last week at the Conservative Party Conference that he would extend the Job Entry Targeted Support Scheme (JETS) until September 2022 and the Kickstart Scheme until March 2022. However, these schemes are not currently supporting the numbers they aimed to, with only 76,900 young people having started a Kickstart role by 22 September 2021, falling far short of the 295,000 jobs Government had approved for funding.

Government should extend the Kickstart scheme until September 2022, allowing employers to engage in several more rounds of placements, which will increase the number of opportunities available as well as allow continuous improvement of the quality of the placements.

Furthermore, these employment support programmes are currently only available for people who are claiming Universal Credit, which excludes many young people from participating in an opportunity that may greatly benefit them. The eligibility requirements should be widened to maximise participation among all unemployed young people to ensure more can access better, more secure jobs as the economy recovers.