© Photo by David Speiss on Unsplash

Today’s labour market data covers the start of the third national lockdown and indicates a gradual uptick in unemployment even with high take up of the furlough scheme, which aims to keep people in work. Most concerningly, we find that young people have been disproportionately affected by job losses over the past year.

Among 18-24-year olds, a third of those who stopped working became unemployed, which raised unemployment by 16.5% on the year (81,000). However, more than a third of young people who moved out of employment became inactive, meaning they were not working, nor looking for work, raising inactivity levels by 84,000 over the same period.

Inactivity includes a range of different groups including full time students and carers, and people who are unwell, but across all age categories, the number of people who are not looking for work because they believe no work is available, (often termed ‘discouraged workers’), increased by 52,000, representing an increase of 52.4% on the year.

Some young workers have faced barriers to entering and staying in work for a long time, with analysis following the financial crisis finding that employers are often reluctant to hire workers with limited prior experience, and those without university degrees finding it particularly difficult to enter good quality jobs. This has resulted in a large share of young workers entering insecure and often low-paid employment, with few opportunities for progression. We saw this exacerbated in the wake of the previous crisis, with scarring effects not only on workers’ employment and earnings potential, but on their physical and mental wellbeing. Therefore, we must develop better school-to-work transitions and diversify pathways into good quality jobs for young workers.

Figure 1: Change in employment level in % over the past year, by age category 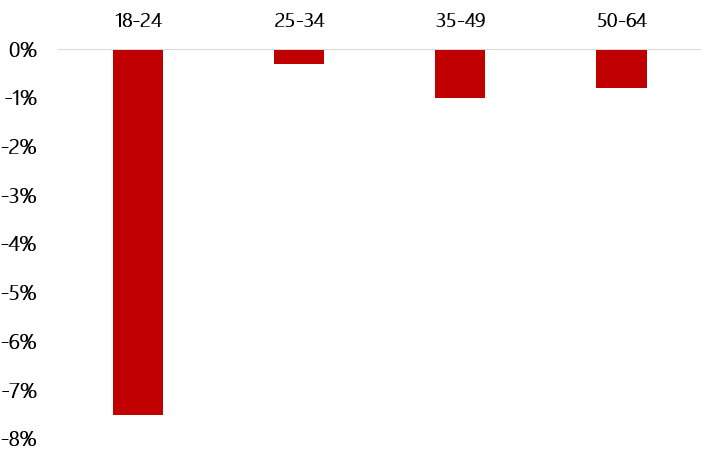 The number of redundancies over the last three months were three times higher than they were over the same period last year, although they have come down from their peak in September, when there were 14 redundancies for every 1000 workers. The rate now stands at 11 redundancies for every 1000 workers. However, it is concerning that despite furlough and business support, redundancies remain high. Given the data released today covers the period immediately prior to the announcement that furlough and business loans and support would be extended beyond April, we may see a further reduction in redundancies over the next quarter, with renewed confidence in the continued support.

Vacancies remain particularly low in accommodation and food services and arts entertainment and recreation, down by 79.8% and 72.6% respectively, compared with the same quarter a year previously. This is unsurprising given that these sectors still remain shut down. However, with the new roadmap out of lockdown indicating that hospitality venues will be reopening for outdoor dining on 12th April, and fully re-opened by 17th of May alongside other entertainment venues, it is likely that these figures will soon begin to pick up. Comparatively other sectors have fared well, with vacancies in construction only down by 0.7% on the year. This aligns with the latest Business Impacts and Conditions Survey findings, which show that the proportion of businesses that have paused trading and not planning re-start the next two weeks was 53.5% of food and accommodation services and 41.5% of arts, entertainment and recreation, compared with just 11% of employers in construction.

Figure 2: Businesses that have paused trading and do not intend to restart in the next two weeks

With vacancy levels remaining low and unemployment rising, Government should focus on supporting young workers, particularly around the transition from school into work. Alongside facilitating engagement with subsidised placements offered through the Kickstart scheme, there is a need to act quickly on the planned changes announced through the Plan for Jobs White Paper to strengthen the linkages between vocational and apprenticeship qualifications and the labour market to ensure there are a range of pathways into good quality jobs.

As we progress through the roadmap and the furlough scheme winds down, it’s essential to shift from a short-term crisis response to a longer-term strategy for supporting workers worst affected by the pandemic.