© Photo by Andrea Piacquadio from Pexels

We are beginning to see the true impact of the COVID-19 crisis on unemployment reflected in this month’s quarterly release. Given the increase in short term unemployment, combined with hundreds of thousands of planned redundancies and the winding down of the furlough scheme in October, we expect to see a shift towards longer term unemployment, with young and older workers facing particular risks. 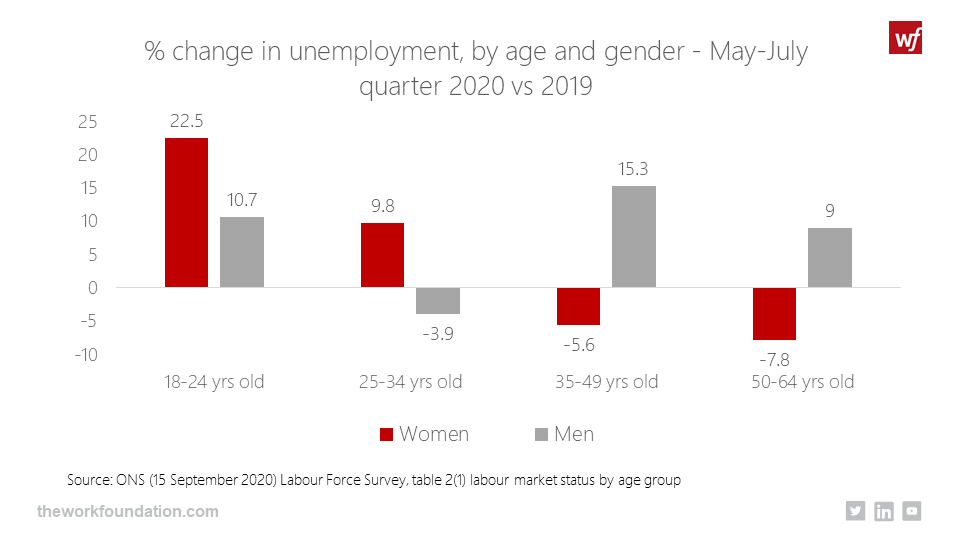 These are worrying signs, given that we are at the early stages of the crisis. There were 695,000 fewer people on payroll in August than in March 2020 according to HMRC PAYE data. In addition, 700,000 redundancies are planned for the third and final quarter this year according to forecasts from IES. An additional wave of redundancies is likely to hit when the furlough scheme ends in October.

Currently, there are nearly 4 unemployed workers per vacancy and that is set to increase when furlough ends. Considering the slow recovery in vacancies, now at 53% of where they were before the crisis (December-February), a higher number of workers will be competing for a shrinking number of opportunities. As such, although the Government’s investment in additional Work Coaches at Job Centre Plus will provide welcome and important support to unemployed workers, there will still be four times as many people looking for jobs as there are jobs available.

There need to be stronger demand-side measures and incentives to bring back furloughed workers, and foster job replacement and creation. For example, offering a reduction in Employer National Insurance Contributions would reduce the costs associated with hiring and retaining staff, and could therefore encourage employers to employ Kickstart participants after their placement ends and/or hire other workers.

It is positive to see the launch of the Kickstart Scheme which aims to mitigate these effects for young people, given similar subsidised placement programmes have a significant positive impact on the likelihood of young people moving in to work and/or off benefits. For example, participants in the Future Jobs Fund Programme were 11 percentage points more likely to be in unsubsidised employment two years after starting the FJF programme. However, with Kickstart placements only available to those on Universal Credit, it is likely that many young people will fall through the gaps and be left with little support to re-enter the labour market.

Further, given the wider economic context, there will need to be a longer-term strategy to ensure the young people who participate in the scheme remain in employment/training after the placement ends.

Prior to the coronavirus crisis, the apprenticeship system was not working well. According to government data, apprenticeship starts in England have continued to decline since the introduction of the apprenticeship levy in May 2017. Furthermore, a recent report from the Social Mobility Commission highlighted that participation in apprenticeships among those from disadvantaged backgrounds is limited.

As such, it is vital that new apprenticeships and Kickstart placements are explicitly marketed towards cohorts who stand to benefit the most.