Lynne Pearce arrived at Lancaster in 1990/1, having gained her PhD from the University of Birmingham in 1987. Whilst studying for her PhD, and in the years immediately following, she worked part-time across of wide-range of further and higher educational establishments in the West Midlands, and then - for one year - in the English Department at the University of Durham. This apprenticeship remains vitally important to the values she attaches to Higher Education and to her recognition of the challenges faced by graduate students embarking on an academic career.

Lynne Pearce's teaching and research have been mainly in the field of feminist literary and cultural theory, but with wide-ranging historical and disciplinary applications. Particular thematic concerns have been in 'the politics of reading', feminist re-scriptings of romance, national / regional literature(s) and identities within the UK and mobilities research. Her most recent books are:

Romance Writing surveys the changing expression of romantic love from the seventeenth century to the present day; Postcolonial Manchester investigates the ways in which Manchester’s polycultural writing scene challenges popular stereotypes of the city at the same time as contributing to the ‘devolution’ of contemporary British literature; Drivetime contributes to topical debates in automobilities research by investigating the cognitive and affective experience of driving (and 'passengering') through close readings of literary texts from across the twentieth century. Mobility, Memory and the Lifecourse explores the formative role of mobiltiies in the production of intimate relationships.

In terms of teaching and administration, Lynne Pearce’s work has centred on the postgraduate community. From 1997-2001 she was Director of Postgraduate Studies in the English Department and, in that capacity, was responsible for initiating a good deal of the research methods training now available both within the Department and the Faculty. From 2001-2003 she was Associate Dean for Postgraduate Teaching in the Humanities and from 2004 she has been one of the core tutors of the Faculty's PGR Research Training Programme [RTP]. From 2009/10-12/13 she also served another term as Director of Posgraduate Studies in the Department of English and Creative Writing. She has now supervised 38 PhD students to successful completion and remains committed to improving the postgraduate student experience.

Lynne serves as a member of the AHRC Peer Review College.

From 2006-2010 Lynne Pearce was Principal Investigator for the AHRC-funded project 'Moving Manchester: How the experience of migration has informed the work of writers from Greater Manchester from 1960-to the present' (see website at www.transculturalwriting.com). Project outputs included: an e-catalogue, an online ‘Writers’ Gallery’, and over 50 publications (creative and critical) all of which are listed on the ‘Moving Manchester’ website.

Feminism and the Politics of Reading (Arnold, 1997)

The Rhetorics of Feminism (Routledge, 2004)

During her time at Lancaster, Lynne Pearce has been centrally involved with the teaching, research and research activities emanating from the Institute for Gender and Women's Studies, and is co-editor, with Maureen McNeil, of the series Transformations: Thinking Through Feminism (see Routledge website for further details). She is thus more than happy to act as a point of contact for people interested in the work of the Institute or, indeed, in research projects which might involve colleagues in both English and Women's Studies.

In 2011 she became a founding member of the Centre for Transcultural Writing and Research (see www.transculturalwriting.com) whose website is also the archival home for the 'Moving Manchester' project).

She joined the advisory board of CeMoRe [Centre for Mobilties Research] in 2014/15 and was appointed Director for the Humanities in August 2015 (see CeMoRe website for full details of the Centre and its activities: https://lancs.ac.uk/cemore/). In this capacity, Lynne has also recently become of co-editor of the new Palgrave Macmillan (USA) series, Mobilities, Literature, Culture, and welcomes proposals from colleagues interested in publishing in this field. Lynne is currently CeMoRe's Acting Director - until September 2020.

My research is located within in the field of literary and cultural theory with a particular interest in mobilities research and literary geography (see recent publications). This includes recent work on driving and auto/mobility and the formative role of mobilities of different kinds in relationships (this overlapping with my earlier work on discourses of love and romance).

I welcomes applications from students working in the field of cultural theory or engaging with literary and other texts to explore cultural events and practices and have a particular interest in supervising projects on mobilities, space/place and landscape (see recent publications). 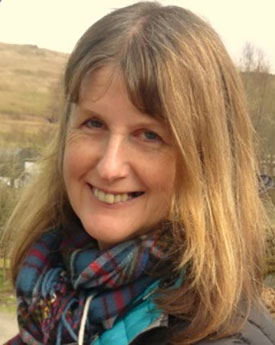