Saleel Nurbhai has published short stories and poetry. His work has been included in The Redbeck Anthology of British South Asian Poetry and in 20/30 Vision. He co-edited and contributed to an anthology of prose and poetry, Spotlight One. Before teaching Creative Writing at Lancaster University, Saleel worked for the Lancaster Literature Festival as a tutor, during which time he worked on projects in Lancashire, and with Age Concern, for which he was commissioned to write a radio monologue. He has also written for the radio.

In addition to Creative Writing, Saleel has also published theatre and music reviews, academic essays and articles, and is author (with K M Newton) of George Eliot, Judaism and the Novels.

He has been shortlisted for the Shorelines Black novel competition and longlisted for a Cinnamon prize.

From 2011-2012 Saleel was an editor of the online journal 'OneTitle' and currently reviews novels for OneTitle. 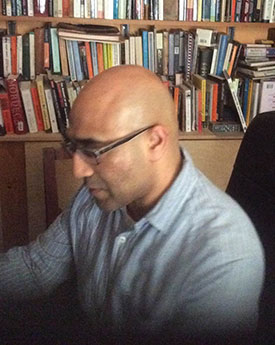