Lecturer in the International History of the Cold War

My research focuses predominantly on the international history of the Cold War. While the initial focus was on the role of neutrality and Britain in the East-West struggle, I am currently working on the Cold War in the so-called Third World, specifically in Sub-Saharan Africa and in relation to Britain's and France's postcolonial security roles in this region. Meanwhile, I have also carried out research on peacekeeping in Africa, and the transformation of European armed forces since the end of the Cold War. Prior to moving into and beyond the Cold War, I carried out research on volunteers in the Waffen-SS.

Currently, my major research project examines and compares the postcolonial security roles of Britain and France in West Africa within the framework of decolonisation and the Cold War (1958-1965). The aim is to analyse how the imperial powers negotiated with Nigeria and Côte d’Ivoire the transfer of power to maintain influence against the pressures from the Cold War and its superpowers, African nationalism, Pan-Africanism, and non-alignment. This allows us to assess whether West Africa was part of individual or common British and French post-imperial or, rather, Cold War grand strategic designs. The project intentionally avoids a Eurocentric perspective by drawing on multi-archival research in Africa, Europe, and the United States, the recent historiography of imperial history and decolonisation, Africa, the Cold War, and post-colonial theory. Ultimately, it aims to contribute to and advance the study of the Global Cold War.

Meanwhile, I have also developed a keen interest in the transformation of European armed forces, as well as France’s current security role and peacekeeping in Africa. This has led, among other things, to two co-edited volumes – a book (Routledge, 2014) and a journal special issue (Journal of International Peacekeeping) – on peacekeeping in Africa. I have an on-going research interest in both African and European security studies. Currently, I am co-editing a more than fifty chapters long Handbook of European Armed Forces for Oxford University Press.

The bulk of my research so far has been in Cold War history. In addition to various articles, I have published a book on Arms Transfers, Neutrality and Britain’s Role in the Cold War (Brill, 2013), and three co-edited volumes – a book (Routledge, 2016) and two journal special issues (The International History Review and Relations Internationales) on neutrality and neutralism/non-alignment in the Global Cold War. My earlier historical research has been on the Second World War. This has led, among other publications, to a book on the man behind the recruitment and the policies of the SS and the Waffen-SS outside the Third Reich’s borders (Alphil-Presses universitaires suisses, 2010).

At a more practical level, I have advised and authored studies for government ministries in Britain and abroad, notably the British Foreign Office, the Swiss Federal Intelligence Service, and the Swiss Federal Department of Foreign Affairs. Furthermore, I have also given talks at and worked with think tanks, such as the Royal Institute of International Affairs (Chatham House), and the International Peace Institute.

I have received grants from the British Academy and the Swiss National Science Foundation. From the latter I have obtained both individual and project grants.

HIST258: The Cold War in Europe

HIST355: A Global History of the Cold War

President, Bibliographical Committee of the International Commission of Military History. 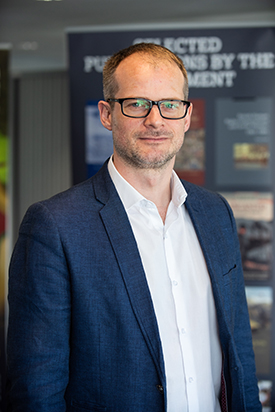