How can we best listen to expressions of imaginings of social and political transformations in the spirit of decolonizing liberation, global and local justice, and high-intensity democracy? What ways of listening put us in a position to respond, to join, to act in solidarity? Which culturally engrained obstacles stand in the way of such transformations, and how can we critically unravel and actively remove them? How can we best understand, and make the most of, the interplays of the poetic and the organisational, of experimentality and emancipation, of imagination and defense?

My research takes on such questions, by deploying poetic sensibilities and cultural analysis and by paying close attention to the poetic and cultural dynamics in three areas: performance and spoken word poetry, committed writing, and cultural imaginaries of acquiescece in the 21st century.

Performance and Spoken Word Poetry -- when it is socially and politically committed and outspoken -- plays with the adventurous poetic words, critical self-awareness, social situatedness, obstinate curiosity, political poignancy and joy in experimentality. It militates against the elitist contempt for oral cultures, and against the nationalist, völkisch /folkish and fascist denigration and destruction of some, and appropriation of others. It enacts and pre-figures alternatives to such contempt, disdain, denigration and destruction. In my engagements with performance poetry I seek to contribute to practices of listening and response that are astute, attentive, committed and open-minded, that strengthen the relevance of spoken word poetry to other areas of life, that nurture the capacity of organizers and poets to resist appropriation and dispossession by market forces and neoliberal cultural politics, and that share their struggle when they go counter to contemptuous aesthetics.

Committed writing -- in fiction and non-fiction, in poetry and prose -- is based on listening closely to those who are not listened to at all, or who are listened and responded to in ways that are not commensurate with their experiences, intentions and desires. The listening practiced before and during committed writing recognizes that the refusal to listen at all, as well as the refusal to (learn to) listen appropriately and respectfully, are political and ideological, even and especially when their practitioners claim neutrality for themself. Committed writing invites readers to practice different practices of listening: practices that work towards undoing privilege, create the potential for solidarity, and that engage with, and position themselves towards, the intensities of those who have committed politically. My research on committed writing -- often from Mexico and other Central American countries -- proposes practices of listening and response from a position that owns up to commitments and responsibilities; as part of it, I'm working with others on knowledges and pedagogies that are based on clear ethical and political positions (see blog series The Aliveness of Memory: https://www.lancaster.ac.uk/languages-and-cultures/blogs/staff-blogs/cornelia-grabner/).

Imaginaries of Acquiescence in the 21st century are a constitutive feature of the cultures of contemporary low-intensity democracies, just as they have been features of totalitarian and dictatorial regimes in the past. I pick apart the hidden transcripts of acquiescence and suppression in our contemporary contexts, whereby 'acquiescence' can also refer to the engagement for, and the pacting with, authoritarian and right-wing movements on the basis of cherry-picking. Among other aspects, I address the dynamics of entanglement, the acquiescence to the stigmatization and expulsion of others, and the concatenations of submission and rendition.

As a direct continuation of three previous research projects, researchers involved in the project Contemporary poetry and politics: social conflict and poetic dialogisms (POEPOLIT II, PID2019-105709RB-I00) explore the relationships between poetics and politics, and their impact in contemporary western societies. With three projects since 2010, the work of a stable group of international researchers has expanded poetics analyses theoretically and in practice, as well as their interfaces with politics. The project is of a comparative and relational nature and focuses on poetry in several languages and from a range of regions and territories.

Individual: Cultural Imaginaries of Acquiescence in Contemporary Low-Intensity Democracies, funded by The Leverhulme Trust from September 2017 until May 2019.

She explores the interplay of emancipation and experimentality in performance poetry, engages with committed writing as a practice of 'close listening', and picks apart the hidden transcripts of the cultural dynamics of acquiescence in the 21st century. She draws on the methodologies of literary and cultural analysis and is currently involved in the research project 'Contemporary Poetry and Politics'.

Specific topics include the role of the poetic word in the resistance to mega-projects; poetic testimony of the contemporary war against the poor; local organisational practices that resist the neoliberalization of urban culture; and Mexican committed writing from the 1970s to the present.

Public spaces and global listening spaces: poetic resonances from the Movement for Peace with Justice and Dignity in Mexico
Gräbner, C. 08/2015 In: Liminalities: A Journal of Performance Studies. 11, 3, 26 p.
Journal article

“But how to speak of such things?”: decolonial love, the coloniality of gender, and political struggle in Francisco Goldman's The Long Night of White Chickens (1992) and Jennifer Harbury's Bridge of Courage (1994) and Searching for Everardo (1997)
Gräbner, C. 2014 In: Journal of Iberian and Latin American Studies. 20, 1, p. 51-74. 24 p.
Journal article

'They only want your Body and Soul': The Poetics of Rebellion and Resistance in Contemporary Tory Britain
Invited talk

Against the Grain
Participation in conference -Mixed Audience

On Killing with Impunity: María Rivera’s ‘The Dead’ and Daniela Rea’s No-One Asked Them For Pardon: Chronicles of Resistance and Impunity
Invited talk

Tuning In, Tuning Out and Tuning Past: Testimony and Resonance in Tom McCarthy's Satin Island and Erri De Luca's Crime of a Soldier
Invited talk

Situations and Events: Intensifications of State Violence in Mexico and the Poetics of Resistance
Invited talk

Authors and the World
Participation in workshop, seminar, course

Poetic Disruptions of the Neoliberal Etiquette: The European
Invited talk 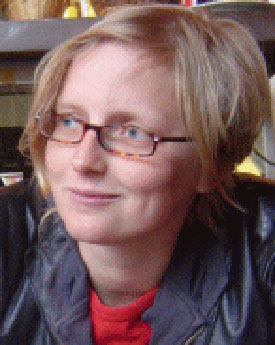