Professor of Design and Creative Exchange

As digital information technologies come to replace their physical predecessors, what properties of the paper-based work environment still remain important for personal work? This paper considers the needs individual work places on the work environment and how these needs are met by both physical and digital information technologies.The core theme of this paper is communication with the self. Two areas are discussed in detail. Firstly, controlling future action through reminding and representing problems, to assist in problem solving activities. Secondly, the shortcomings of digital information technologies for personal work are discussed, and possible directions for addressing these shortcomings suggested. A design approach to resolving these issues is suggested, accompanied with an example software artefact design.

This paper describes a project that adopted an innovative user-led approach to produce a novel redevelopment of presentation and interaction strategies for Interactive Television (iTV). The approach involves making technical expediency subservient to the aspirations and frustrations of users through an ethnographic study. In this case 20 households set the scope the project and of involving these collaborative users in an ongoing participatory design and user testing process that aims to bend technology towards users rather than concentrating on the technologically expedient solution. This project called UITS (User-Led iTV Services) and undertaken in collaboration with Westminster University with a budget of £73 000 over two years funded by HEIF2 through the West Focus consortium. The outcomes of this project described in this paper present some significant changes to the way iTV could operate. Some of these were systemic changes (for example pay-as-you-go iTV) but the major proposal was the employment of a supplementary second screen on which (almost) all graphical information was displayed, freeing the main screen to show TV programme all of the time. Through in-home testing we found this was dramatically more accessible in terms of legibility, adaptability and less intrusive on general TV viewing. It also facilitated a 'lean back' mode of interaction more harmonious to current TV practices; iTV services operated more like integrated interactive magazines.The success of this project led to a follow-on called BITE, funded through HEIF3 for £105 000 over 2 years broadening the scope of investigation it has also been presented at workshops in CHI2006 (Monteral) and EuroiTV 2006. It was the subject of a daylong knowledge transfer event at the Business Design Centre, London, 14th June 2007 (http://dea.brunel.ac.uk/uits). We were invited to publish a description of the more technical HCI aspects of UITS in the Usability Professionals Association's User Experience Magazine, published Volume 6, Issue 3, 2007.

This paper describes a new approach to interface and service design in interactive TV as part of the IST (EU) funded project CISMUNDUS. CISMUNDUS was one of the key EU projects establishing the capabilities and possible applications of the newly developed UMTS ('3G') telecommunications networks and interactive TV; it included partners such as Philips Research, France Telecom, Rye, IRT and Motorola. This paper describes a novel approach to the development of services for this new hybrid environment that draws together iTV and Telco networks. This approach allows for the almost automatic translation of service design from a very accessible wildly used simulation / authoring software (Macromedia Director) into MHP the much less accessible language of iTV broadcast. I led the user interface design and information architecture of the new services developed in the prototyping process in addition to a broader contribution to the design of the simulation design tools. A practical demonstration of this system and using live broadcast media was presented as part of the IST media village at the IBC (International Broadcasting Conference) 2005.

C Space is a series of user mediated, virtual reality environments that are location aware and situated within specific geographical locations (for example a park or city square) by data-casting to mobile devices using DVB-T (terrestrial digital TV) technology, in essence this is a system that allows the broadcasting of virtual reality environments that overlay specific geographical areas and are accessed through a portable (PDA-like) terminal.C Space was part of a large European Union (IST) funded research project called CISMUNDUS (Convergence of IP-based Services for Mobile Users and Networks in DVB-T and UMTS Systems) exploring the convergence of mobile phone technology and digital broadcast in mobile devices. The aim of CISMUNDUS was to design, make and field test devices and services that exploit the possibilities of combining DVB-T (terrestrial digital TV) with UMTS (3G telecom technology) in mobile devices. This project had a total funding €8.1 million (€4.3 of which came from industrial partners including Philips Research, IRT, RYE and France Telecom). 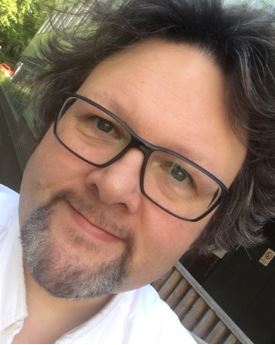