I teach courses on Politics and History of the ''Middle East''. I was a Visiting Fellow at LSE Middle East Centre and also won a fellowship with WIIS (Women in International Security) in Washington DC. I have also been granted the highly competitive and prestigious fellowship by Kroc Institute at Notre Dame Univerity to do research on peace and justice in the Syrian context.

My areas of research expertise include identifying the ideological borrowings between European and Arab nationalism, the rise of the nation-state in the Middle East, the Syria crisis, militarism and the construction of masculinity in the Arab world.

I have been working on two research projects in the last two years investigating state Islamism in Syria, the relationship between authoritarianism and religion, sectrianaims and nationalism.

My research also focuses on the association between the rise of nation-states in the Middle East and the perpetuation of militarism, despotism and fundamentalism, analysing militarism in the Arab context not only as an institution used by the state, but also as an ideology that perpetuates masculinity and gender bias.

Before moving to Lancaster, I was lecturer at the University of Manchester teaching Modern Middle Eastern History. She was based at the Centre for Cultural History of War.

I am currently working on my book Constructing the Nation: Masculinism and Gender Bias in Syrian Nationalism, which looks at the idealisation of militarism in Syrian culture and constitutions with particular focus on the origin of the Ba’ath ideology in the thought of Syrian nationalists.

PPR236: Politics and History of the Middle East

I am interested in supervising research proposals in the following areas : Sovereignty and legitimacy in the Middle East, construction of masculinism and natioanlism in the Arab world, roots of sectarianism in Arab societies, women rights and state-building in the Arab world.

Securitization as a Tool of Survival: The Deployment of Religious Rhetoric in Bashar al-Asad’s Speeches
Aldoughli, R.B. 20/08/2020 In: The Middle East Journal .
Journal article

Interrogating the Constructions of Masculinist Protection and Militarism in the Syrian Constitution of 1973
Aldoughli, R. 1/03/2019 In: Journal of Middle East Women's Studies. 15, 1, p. 48-74. 27 p.
Journal article

The Securitisation of the 'Masculinist' other in the Syrian Conflict
Aldoughli, R.B. 12/11/2018 Foreign Policy Centre.
Commissioned report

Belonging to a Militarized Syria as a Woman
Aldoughli, R. 2018
Other contribution

Syrian nationalism is all about masculinity
Aldoughli, R. 2017
Other contribution

The Construction of a Patriarchal Militant Identity in the Syrian Constitutions (1973-2012)
Aldoughli, R. 2016
Other contribution

The De-Construction of Masculinism in the Two Contemporary Nationalist Schools of Thought: Primordialism and Modernism
Aldoughli, R. 2014 In: The Luminary. 5
Journal article

The Relationship between the Germanic and French Nationalist Thinking and their Contribution to the Shaping of Arab Nationalist Thought
Aldoughli, R. 2014
Conference paper 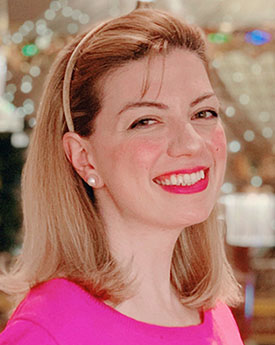 My office hours in the Michaelmas term: