Anderson Jeremiah holds a Ph.D degree from New College, the University of Edinburgh and is an ordained Anglican Priest. Anderson's research primarily centres on the study of contemporary Christianity and the socio-cultural implications of the shift of Christianity to the global south. His areas of academic expertise include Christian Theology in Asia, Postcolonial Approaches to Theology, Anglican Communion, Dalit Studies, Contextual Theologies, History of Christianity, Modern Missionary Movements, Inculturation and faith, Biblical Hermeneutics, Economics and Liberation Theology, Encounter between Christianity and other Religions, Inter-Faith Understanding, Religious fundamentalism and Politics, Religious Pluralism, Poltics and Society in India.

My research develops a localised perspective of the growth and expansion of Global Christianity. From anthropological and sociological perspectives I accentuate the heterogeneity and plurality of lived Christian experience in different contexts, thus bringing to focus the interface between culture, worldview and belief. I am also increasingly interested in the impact of globalisation and migration on religious belonging and the resulting changes on contemporary Christianity. Within the broad academic research on the hybridisation of religion, I particularly work on Christianity, with special interest in the social and political implications of Christian growth particularly in Asia and Africa.

Director for Internationalisation and Engagement

Christianity and Citizenship in India
Participation in workshop, seminar, course

Religion: Is it the solution or the problem?
Invited talk

Jesus and Muhammad: What would they say about Religious Extremism
Invited talk

Theological Conversations: The Church of England Diocese of Blackburn AND Evangelisch-Lutherische Landeskirche in Braunschweig
Invited talk

Ethics, Public Theology and Church of England
Participation in conference

Christianity and Citizenship in India (Event)
Membership of committee

The visible and less-visible: Tangiability of Sacred
Invited talk

"The Covenants of the Prophet Muhammad with the Christians of the World" by Dr. John Andrew Morrow
Public Lecture/ Debate/Seminar

Why Do We Need Dialogue?
Public Lecture/ Debate/Seminar

The Politics of 'Empire', 'Mission' and 'Caste' in Indian Christianity
Invited talk 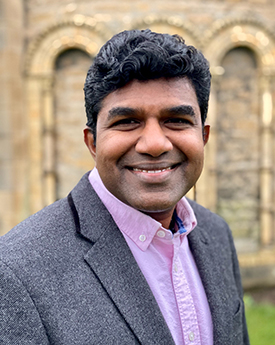 I dont run office hours during summer term, but can be reached by e-mail.

Office is located in B69 County South