Since the furlough scheme ended, unemployment has been consistently low at a time when we’ve seen record vacancies, meaning fewer people have been actively looking for work than usual, resulting in opportunities available outpacing the number of jobseekers.

Some had anticipated that a labour market with employers competing for workers would allow workers to negotiate better terms and conditions, but the picture is complex. While some workers have secured a pay rise, inflation is already outpacing wages and expected to do so increasingly into next year.

A key priority for Liz Truss in her first weeks as Prime Minister should be to manage inflation and level the surging energy costs, protecting workers’ wages on the one hand and ensuring that employers have the certainty they need to offer more flexible, stable and high paid work.

Employers are competing for candidates

The phenomenon of low unemployment coupled with high numbers of job opportunities is referred to as a ‘tight’ labour market. Employers have been struggling to recruit workers with the skills and experience they need, and new analysis from the Office for National Statistics (ONS) aims to explain why this is happening.

Despite what we may have expected, there is not a huge mismatch between people’s skills and the industries that are hiring, although there could be unidentified mismatches in terms of education and skill.

In fact, the actual number of people actively looking for work, or who are available to work, is lower than usual.

This suggests that the tightness in the labour market is at least partly driven by people leaving work during Covid-19. The last two years have seen large flows of people aged over 50 moving from employment to retirement or stopping work due to illness.

Underemployment is decreasing, but other indicators of insecurity are going up

In the current economic context, we might expect to see an increase in people wanting to work more to increase their earnings. Underemployment indicates where people want to work more hours against the same basic rate of pay, and can apply to people working full or part-time.

The latest ONS analysis suggests that underemployment is very low. For the first time, levels of underemployment have come back down to pre-financial crisis levels. In part, this could be because employers struggling to recruit are in a position to give their existing staff more hours, meaning that those who previously may have wanted more hours to increase their earnings are now working the hours they want to.

The number of employees who are working full-time (between 31 and 40 hours a week) has grown by 10.1% since 2019, representing an increase from 15.7 million employees working these hours to 17.3 million. Less than half of this increase is due to self-employed workers shifting into employee status and thus being counted among this group.

Underemployment is one of the indicators of insecure work in the Work Foundation Insecure Work Index, as it is related to a financial need to work more hours to derive enough income to get by. It is possible that as the cost of living crisis continues into the autumn and businesses slow down their activities due to higher operational costs, we may see a return to higher levels of underemployment. 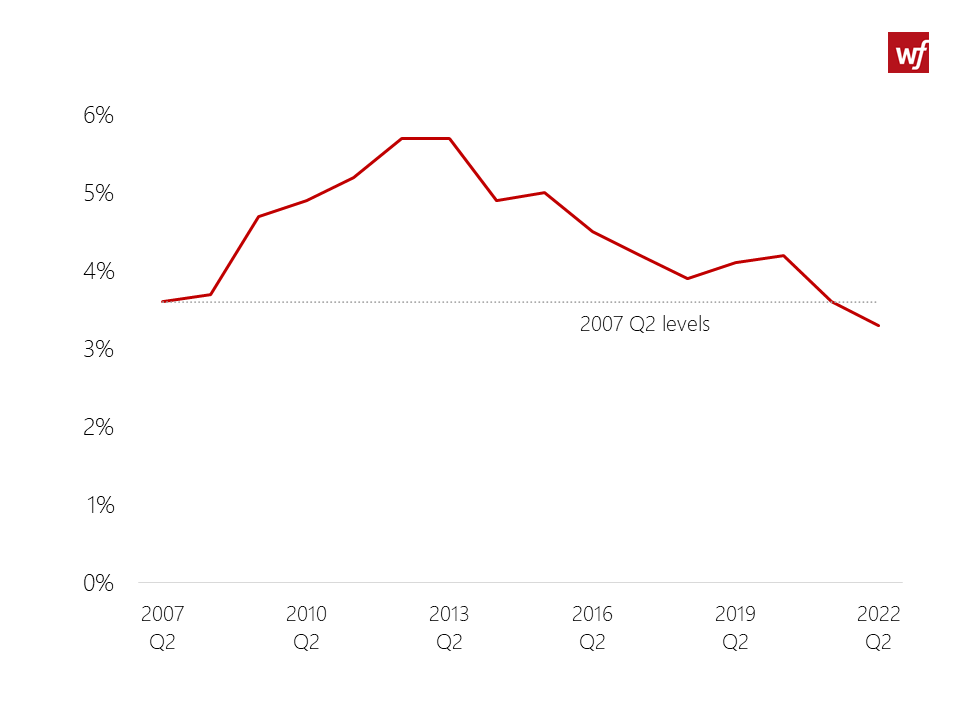 It is positive that a greater proportion of workers are now able to obtain the number of working hours they want, or need. However, early analysis for 2022 from our Insecure Work Index show that other indicators for insecurity have increased. Temporary work, low pay and variable pay have increased since 2020. This suggests that even though there may be many vacancies in the labour market, we know very little about the security of the jobs on offer.

A tight labour market raises two risks for employers: it makes it harder to recruit, and it becomes more likely that valued staff are lost to competitors. The main avenue for workers to ensure a substantial wage increase appears to be to switch jobs, which they are doing in large numbers.

A high number of people started new jobs in the April-June quarter of 2022. Among them, the largest proportion moved from job to job. These are people potentially incentivised to search for better pay and conditions by the pressure of increasing cost of living.

The second largest group of those who have started new jobs is composed of those moving out of inactivity, meaning they were previously out of work and not looking for work. Earlier this year, the ONS surveyed workers aged 50 and over about the reasons why they would, or would not, return to work. For those who would consider returning to work, respondents noted the need for greater flexibility at work, the ability to work remotely and to have greater work-life balance, for example to combine work with caring responsibilities.

Over the last quarter we started to see that older workers are increasingly moving from inactivity into employment or active job seeking. Vacancies have been consistently high for months, but it’s only as the cost of living pressure is ramping up that those who had elected to exit the labour market are now starting to return.

With Citi Bank warning that inflation may rise to 18% in the first quarter of 2023, wages that have been largely stagnant over the past 15 years will see their real value drop further. At the same time, we are seeing signs that increased energy prices are impacting businesses’ ability to continue their activities. Without support from Government, businesses may cease to operate and public sector organisations will have to divert their budgets to meet energy bills.