This month’s statistics show signs that the labour market recovery is stalling, with a continued outflow of older workers from the labour market, persistent hiring challenges and real term wages falling short of inflation and impacting low income households. Government should act now to protect those who are most affected by the cost of living crisis.

Today’s data covers the period from December 2021 to February 2022. It shows that while employment remained stable over the winter, there are half a million fewer people in work now than before the pandemic.

At first glance, this month’s reduction in unemployment down to 3.8% appears positive. However, rather than reflecting growth in employment, this is in fact driven by people leaving the labour market and becoming inactive, meaning they are out of work and not looking for work.

93,000 people left the labour market this winter, bringing inactivity to 21.4%. This shift is particularly concentrated among those aged 50-64 and continues the trend we have witnessed over the past few months. Last month’s blog delved deeper into the reasons older workers have for leaving the labour market and suggested the need for a Plan for Participation.

Figure 1: Change in employment levels between pre-pandemic and December-February 2022 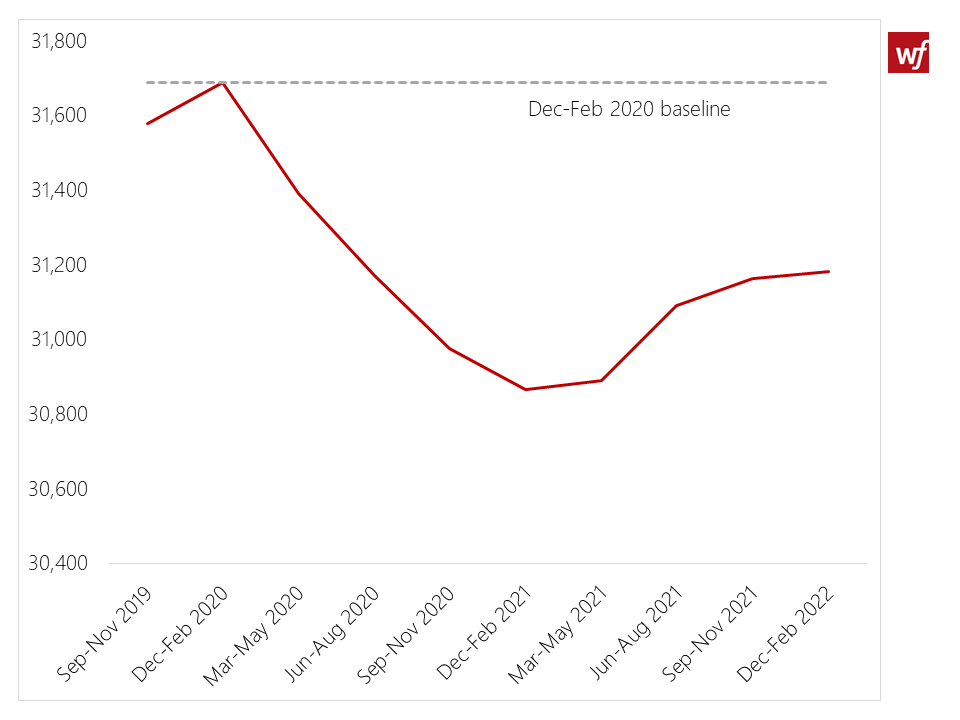 Wage growth lags behind inflation and is impacting living standards

Today’s data shows a 4.0% growth in regular wages (excluding bonus payments). In real terms, accounting for inflation, this equates to pay growth falling by 1.0%. Where we do see real terms wage growth, this is driven by bonus payments in a few very specific sectors. The first few months of the new year see many working in the financial sector receiving bonuses, but workers in other sectors, particularly low paid workers will see their living standards fall.

Experimental data from the ONS released today also suggest that median monthly pay increased by 6.0% per year in March. This suggests that some employers have been raising wages to attract and retain staff, as workers are hit by rising prices. However, pay still lags behind February’s CPI inflation rate of 6.2%, which is expected to rise to 6.7% for March.

National Minimum Wage rate increases took effect on the 1st of April, with the rate for those aged 23 and over increasing by 6.6%, from £8.91 to £9.50 per hour, but the impacts of this won’t be seen in wage data for a few more months. However, given the Bank of England has already forecast inflation to rise to 8% in spring, and potentially even higher later in the year, this pay increase is likely already being swallowed up by rising food and fuel costs.

Indeed, a reduction in consumer power is already being felt in some parts of the economy, hinting at the start of a recession. New data from the British Retail Consortium indicates that shop sales have slowed, growing by just 3.1% in March down from a 6.7% rise in February.

The full effect of this pressure on spending hadn’t yet been felt by businesses, with new research from Accenture finding that UK consumers expect inflation to have a significant impact on their spending over the next year. Almost half (49%) expect to spend more on food and groceries. One in three (33%) expect that other basic items such as home care essentials will take up more of their monthly budget.

While growth in vacancies is slowing, the number of jobs listed remains high at nearly 1.3 million. For the first time in 50 years, there are as many vacancies as there are unemployed workers.

This increasingly tight labour market should incentivise employers to review their wage offer and consider additional steps they could take to protect the financial wellbeing of their workforce through the challenges ahead. Pay and wider benefits are an important part of the story, but we know that guaranteed hours are crucial in enabling workers to plan and budget for the future.

Government urgently needs to do more to protect the incomes of people who are most affected by the current cost of living crisis.

At minimum, Universal Credit (UC) should be uprated in line with inflation. Last month, the Prime Minister promised to examine this proposal, but stopped short of committing to deliver the change. Mel Stride MP, a Conservative former Treasury minister and current Chair of the Treasury Select Committee, argued that this would not lead to additional costs for the Treasury over the long run given that it would mean a smaller increase is required at uprating next year.

Additionally, Government should make UC work better for people in employment. We know that currently around 900,000 people rely on Universal Credit to top up their earnings and help meet essential living costs. They are hugely affected by the fall in the real value of both their wages and their benefits payments.

To meet this challenge, Government should allow workers on UC to keep more of their earnings while in work by extending eligibility for work allowances. Supporting workers with the up-front costs of childcare, rather than offering payments in arrears, would be pivotal in supporting lower income families over the months ahead. Finally, building more flexibility in to Universal Credit, so that it offers a meaningful safety net for individuals whose earnings vary from month to month will be essential to make sure support reaches those who need it most.

For the first time in 50 years, there are as many vacancies as there are unemployed workers.