© Photo by Clem Onojeghuo from Unsplash

Today’s labour market statistics make for stark reading. Redundancies increased by a record 114k on the quarter to August, which is double the number it was at the same time last year. As of September, there remain 673,000 fewer people on payroll compared to March, with indications that younger and older workers are most impacted. And while September saw a record increase in the number of vacancies, this was from a very low base, and there are still over 40% fewer vacancies compared to the same period last year.

HMRC PAYE data shows an increase of 20,000 workers on payroll in September compared with August, which does little to recover the nearly 700,000 jobs lost over the spring. The Labour Force Survey shows that the decrease in employment levels we see this quarter are strongly driven by younger workers, particularly those aged 18-24. The lowering employment levels among young people also drive increasing unemployment numbers, which are particularly high for this group. Further, the increase in inactivity levels this quarter appears to be driven by strong increases among both young and older workers, but if we take a slightly longer-term view and compare this quarter to the same time period last year, we see that nearly 230,000 workers aged 65 and over have become inactive. In other words, larger numbers of older workers became inactive earlier on in the COVID-crisis and we are now seeing this mirrored by younger workers. 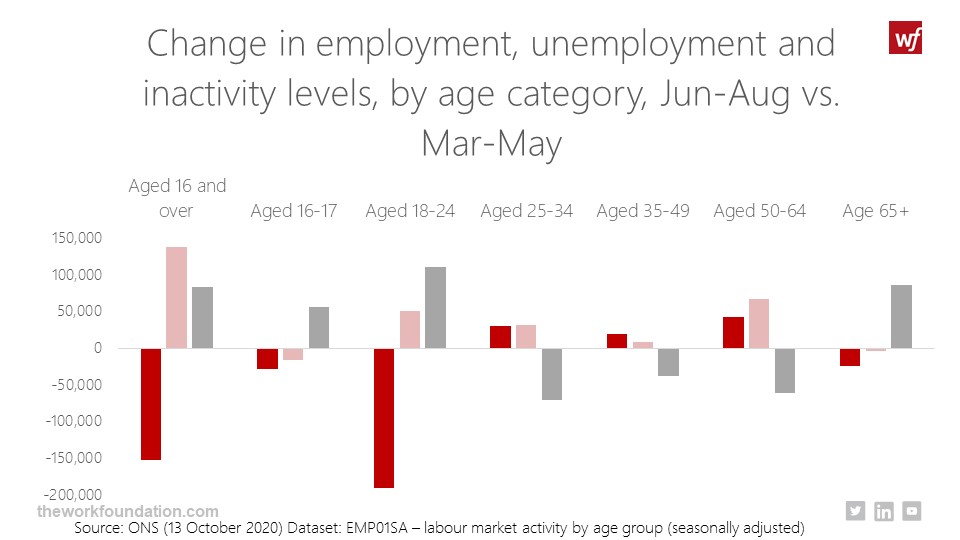 Perhaps counterintuitively, average weekly pay has increased over summer, which may be somewhat unexpected, as we know 4.8 million people were still furloughed as of 31st July and are not receiving their full wages. The overall increase in average pay is driven by pay growth in financial services and the public sector. In other sectors, such as wholesale and retail, pay has nearly recovered, and is now approaching 2019 levels. This could be partly due to a return from furlough, but the number of young workers being shed from these sectors (who are often low paid), could be driving up average pay in these parts of the economy. The ‘recovery’ in pay may then reflect a shifting composition of the workforce, where permanent, often higher paid staff have so far been retained, while more flexible labour has been let go. Conversely, this could also explain the still lower levels of pay in construction, if we assume that workers have been largely retained, but were furloughed or saw hours reduced in other ways. 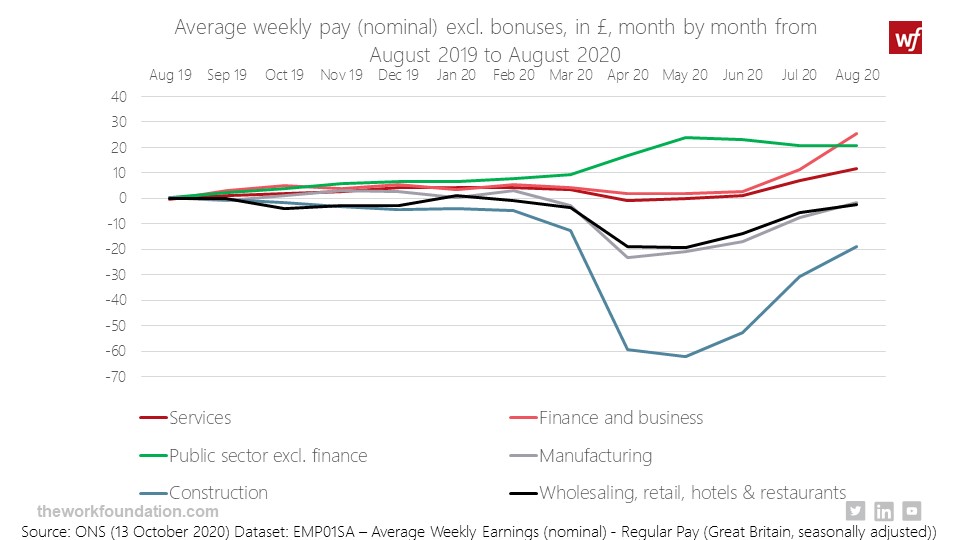 Vacancies have increased overall by 144,000, but the number of jobs available is still 40.5% below where it was pre-pandemic. This quarter, we are starting to see a gradual uptick in vacancies in the sectors that were most affected by the initial lockdown restrictions, with an increase of 25,000 in accommodation and food services, 19,000 in wholesale and retail and 14,000 in construction. Vacancies in transport and storage have also increased by 14,000 this quarter, reflecting the increased demand in online shopping over the early stages of the crisis.

However, some of the sectors that are seeing an increase in vacancies this quarter are nevertheless among the worst affected sectors overall, when looking at vacancy figures prior to the pandemic. Wholesale and retail vacancies are down by 114,000 compared to February this year, and likewise accommodation and food services are vacancies are still down by 65,000 overall. Worryingly, the worst affected sector is human health and social work activities, with vacancies down by 126,000 since February.

Our recent blog highlighted the insecurity and acute health risks faced by workers in the sector, which the pandemic has exacerbated, and the long term recruitment challenges it faced before the crisis hit. Today’s statistics are therefore particularly concerning given the pressures on hospitals and the wider sector as we head into Winter. Despite the increasing focus on vaccine and treatment research that the pandemic has brought, professional scientific & technical activities nevertheless saw the second highest drop in vacancies since the beginning of the pandemic, reducing by 66,000 since February.

With a high likelihood of further local lockdowns leading to further rises in unemployment in the months ahead, a key priority must be to strengthen the social safety net to ensure those who do lose their jobs have the support they need to get by in an increasingly challenging jobs market. As a first step, Government should reverse plans to cut essential Universal Credit payments by £20 per week and remove the threat of sanctions for those looking for work over the coming period.

Note: This month, the Labour Force Survey data was reweighted by the Office for National Statistics to account for differential response rates of home owners and renters over the COVID-period. This relates to employment, unemployment and inactivity figures in the blog, which reflect the ONS revision of the Spring and Summer quarters.