© Photo by Victoria Heath on Unsplash

Today’s labour market update shows an economy performing significantly below pre-pandemic levels, despite the fact that much of the data precedes the introduction of tiered restrictions in October and the latest national lockdown in November. Redundancies have reached a record high, unemployment among young people has steeply risen, and vacancy levels, though temporarily increasing in the short time frame before new restrictions were introduced, remain below 2019 levels.

The flash estimate of HMRC PAYE data shows that the number of employees on payroll declined again in October, resulting in 782,000 fewer employees on payroll than in March. Where in previous months, the impact of the pandemic on unemployment has been muted, we now see it more clearly reflected in this month’s update. Unemployment rose on the quarter, with the strongest increases on the younger and older sides of the age spectrum. Unemployment levels increased by 16% for those aged 18-24 and 20% for those aged 25-34. Further, there was a 33% increase in unemployment for those aged 50-64, which is concerning, as we know that older workers struggle to re-enter the labour market.

The number of young people experiencing long term unemployment has tripled over the last quarter, with 33,000 18-24-years-olds now having been out of work for over two years. A further 65,000 have been out of work between one and two years and are also at risk of long-term unemployment should the current job climate persist. This is very concerning, given that we know there are scarring risks related to long-term unemployment for young workers that may impact their future job opportunities, their earning potential, as well as their physical and mental health (see for example Bell & Blanchflower). 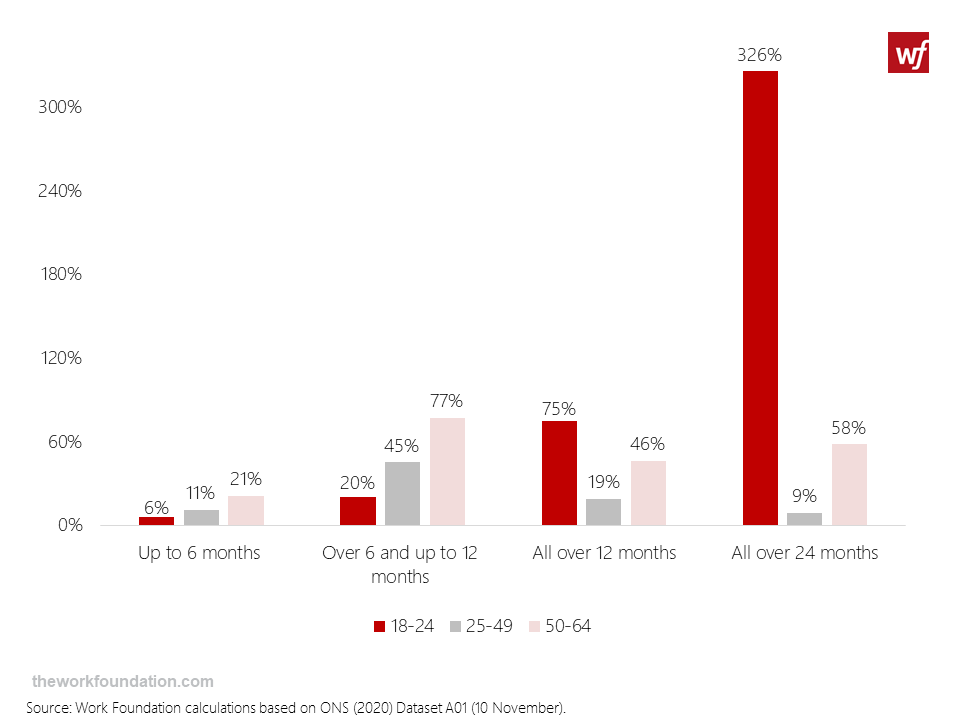 Redundancies reached a record high of 314,000 in the three months to September, an increase of 181,000 on the quarter. This may be reflective of businesses’ struggle over the summer under varying restrictions, uncertainty amidst several rounds of revision to support schemes, and the planned end of the Coronavirus Job Retention Scheme on October 31st. Now that the scheme has been extended until March, we might see redundancies deferred. However, we might also see low business confidence and protracted uncertainty over the winter continue to give rise to large scale redundancies. Eurostat’s Economic Sentiment Indicator, which is a weighted average of selected questions from business surveys, shows that business confidence has increased to 84.6 in October from its lowest point of 61.7 in April, but remains below its pre-pandemic level (averaging 93 across January to March), and is likely to be impacted by the second lockdown.

There remain 35% fewer jobs being advertised than over the same period last year. Vacancies did increase by 146,000 on the quarter, which may reflect the temporary resumption of business activity over the summer, meaning we could see a reduction in vacancies once the current lockdown becomes visible in the statistics. 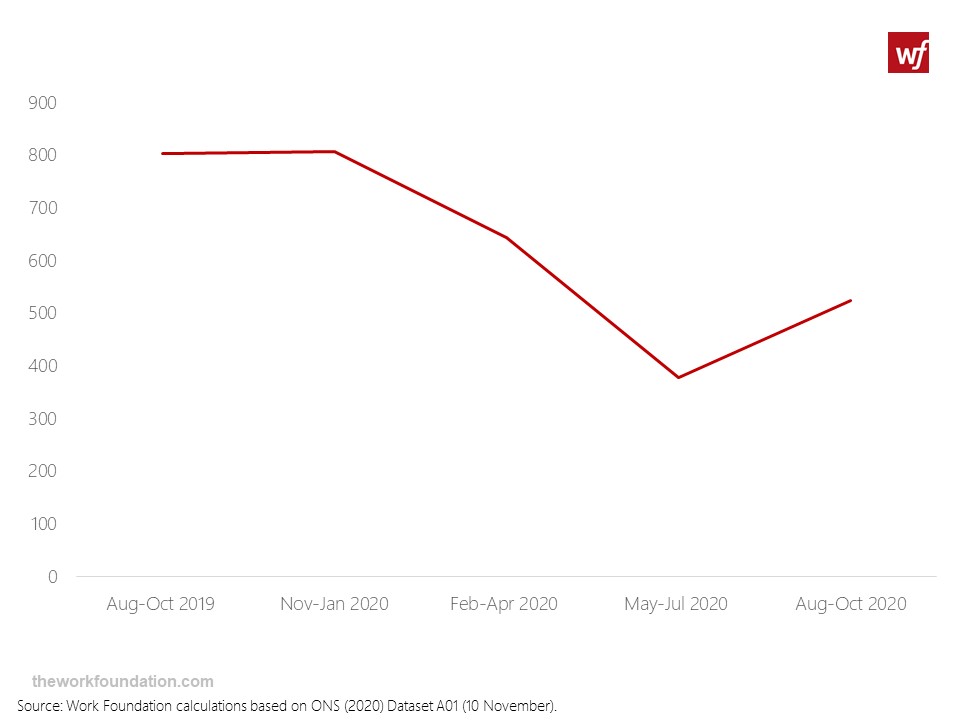 Vacancies have fallen furthest in hospitality (described as accommodation and food services by the ONS). Despite an increase of 14,000 on the previous quarter, vacancies in hospitality are still down by 67.1% (62,000 fewer vacancies) compared to this time last year. Similarly, retail vacancies are still down 53.6% (45,000 fewer vacancies) compared to last year. These figures reflect that the pandemic appears to have accelerated pre-existing trends in the sector, such as the shift to online shopping. As our briefing earlier this year highlights, these shifts are likely to have a disproportionate impact on some groups of workers, such as women in routine and manual occupations in retail.

With so many having already lost their job and a hugely challenging winter to come, it’s vital that the Government strengthens our social safety net so that people can get the support they need. This should begin by reversing plans to cut essential Universal Credit payments by £20 per week and removing the threat of sanctions for those looking for work in these challenging circumstances.