Keith Hanley studied English at Lincoln College, Oxford (MA, B.Litt). At Lancaster (Ph.D) he founded the Wordsworth Centre, which he directed from 1988-2000, and initiated the transfer of the John Howard Whitehouse Ruskin Collections from Bembridge school, directing the Ruskin Centre at Lancaster from 2000-2008. From 1994 he has co-edited the quarterly Nineteenth Century Contexts: An Interdisciplinary Journal (published by Routledge since 2002), currently with Alex Wettlaufer, University of Texas at Austin. He has held posts at a number of European universities and at Notre Dame, Indiana.

Since 1991 he has been a permanent member of the executive board of the American organisation, Interdisciplinary Nineteenth-Century Studies (INCS), which holds annual conferences throughout the United States and occasionally in Europe. He serves on the advisory board of Anglica: An International Journal of English Studies, Warsaw. His interest in nineteenth-century interdisciplinary studies is reflected in many edited collections of essays, for example, (with Ray Selden) Revolution and English Romanticism: Politics and Rhetoric, Prentice Hall/Harvester Wheatsheaf, 1990, (with Tony Pinkney and Fred Botting) Romanticism Theory Gender, Ryburn Publishing/Keele University Press, 1995, (with Alison Milbank) From Lancaster to the Lakes: The Region in LIterature, NWRS, 1992, and three collections on Ruskin, Art and Society. With Greg Kucich he co-edited the collection Nineteenth Century Worlds: Global Formations Past and Present (Routledge, 2008).

Professor Hanley is a Fellow of the English Association and of The Royal Society of Arts. He is appointed as a trustee and director of the Shakespeare North Trust.

Professor Hanley lectures and teaches on undergraduate courses on Victorian Literature and British Romanticism, and contributes the module on Literature and Place to the nineteenth-century M.A.

He has written widely on Wordsworth from a historicist and psycholinguistic point of view, including a monograph, Wordsworth: A Poet's History (Palgrave, 2001), and articles and chapters, of which the following are a selection:

His Ruskin researches produced related articles and chapters, including:

His long-standing interest in scholarly editing, textual criticism and bibliography has informed the following works:

A collection on theory and practice, Romantic Revisions, with Robert Brinkley (Cambridge University Press, 1992); critical editions of George Meredith and W.S.Landor (Carcanet, 1984/88 and 1981/88), and Joanna Baillie: A Selection of Plays and Poems, edited with Amanda Gilroy (Pickering and Chatto, 2002); An Annotated Critical Bibliography of William Wordsworth (Harvester Wheatsheaf, 1995); 'Textual Issues and a Guide to Further Reading' in The Cambridge Companion to Wordsworth, edited Stephen Gill (Cambridge University Press, 2003); and the entries on 'Wordsworth' and 'Landor' in The Cambridge Bibliography of English Literature, 3rd. edn., edited byJoanne Shattock (Cambridge University Press, 2000). He was Lead Investigator and Consultant Textual Editor for The Electronic Edition of John Ruskin's Modern Painters I, funded by the Leverhulme Trust, 2000 - 2002. http://www.lancs.ac.uk/users/ruskin/empi/index.html

He is currently working on a book project, Travelling in Cicircles: Wordsworth and the Creation of Sacred Space in Victorian Literature, editing Ryuzo Mikimoto's English works and researching Laurence Binyon's, Edmund Blunden's and William Empson's roles in the mutual influences of Japanese and English literary aesthetics.

Following a recent JSPS invited fellowship at Japan Women's Women's University, and visiting professorships at Gakushuin and Waseda universities, Tokyo, he is finishing a book on English Writers in Japan and contributing to various research projects on Japanese Cultural Nationalism and Western Art Critics.

I am interested in interdisciplinary approaches, especially in literature, religion and the visual arts, especially in relation to Wordsworth, Ruskin, Newman and nineteenth-century Catholic literature. My most recent publications have focused on Cultural Tourism in Europe and cultural nationalism in Japan. I am currently working on a book about the construction of sacred spaces in nineteenth-century literature. 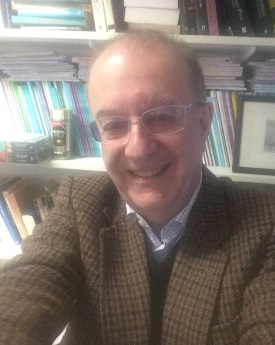