Presenting my research on Rammstein at a national conference - Hannah Wolfenden

Our MA student Hannah Wolfenden has recently presented her research about the German band "Rammstein" at a national conference. Here's how she experienced it.

Whenever I mention that I'm researching Rammstein, I usually get one of two responses:

My reply to the first question is: Rammstein are an industrial metal band from East Germany (the former German Democratic Republic, GDR). They're loud, wild and quite controversial for a number reasons, and also Germany's largest musical export.

My reply to the second question is: I absolutely adore them. Their music is amazing and they're really interesting to think and write about once you scratch the surface... Their lyrics aren't always about sex and cannibalism!

Whilst I'm currently studying Rammstein in regards to German national identity for my Master's dissertation, which focuses on German and Scottish national identity in popular song lyrics, it was my undergraduate dissertation entitled Locating Rammstein's Heimat which scored me the chance to attend and speak at a national conference on 'German Pop Music in Literary and Transmedial Perspectives' hosted at Aston University.

The conference was organised by the amazing Uwe Schütte, who is an expert in German pop music, and it was generously sponsored by the DAAD.

This was my first ever external conference - both to attend and to speak at! It was really inspiring and validating to attend a conference where there were other researchers looking at similar things as to what I am (and people even knew who Rammstein are and a handful even tolerated their music!). I really enjoyed all the papers: my particular highlights were David Stubb's talk on Krautrock (just exactly what Krautrock is and how it's made an impact on Germany's music industry), David Pattie (University of Birmingham) looking at the concept of 'blurring' in Kraftwerk's oeuvre, two other young researchers from Bielefeld (Anna Lenz & Patricia Bollschweiler) who introduced us to K.I.Z., Antilopengang and Feine Sahne Fischfilet (google them - they are all very interesting German bands!), and Tom Smith (University of St Andrews) who gave a really interesting look at techno and nostalgia and how this has been neglectful of people of colour and the LGBT+ community.

The conference was conducted in both English and German, which definitely was a great experience. It was helpful to see that concepts I already knew about were being used in similar studies, and to be introduced to other ideas and artists. 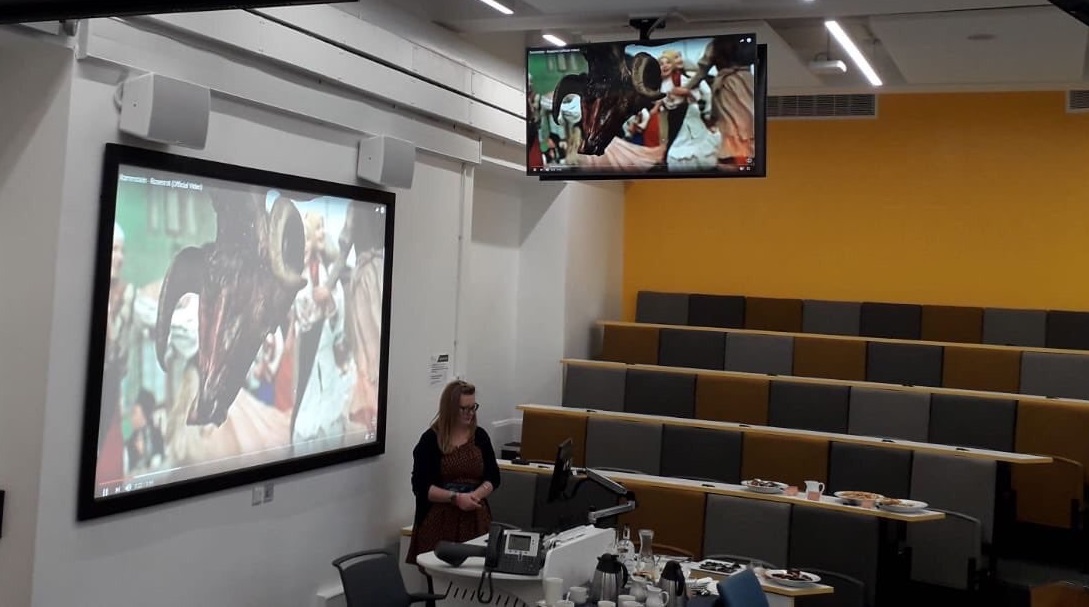 The big moment then came when it was my turn to the plate!

My research focuses on the difficulties trying to pin-point where exactly Rammstein's Heimat (roughly 'home') can be found. All the band members are from East Germany, and many still identify as "East German", even though the GDR no longer exists. However, the band are packaged as a uniquely (reunified) German phenomenon and do have great success in Germany (their debut album was in the German charts for 102 weeks!), but also come under intense criticism. In addition, Rammstein are comfortable on the international stage and are the only German language band to have a platinum selling record in the USA. And yet notoriety still follows them abroad.

Many of their song lyrics feature references to the German literary canon and German literary techniques. Rosenrot is an adaption of Goethe's Das Heidenröslein and the Grimm Brothers' Schneeweißchen und Rosenrot, while Mein Land uses the Wanderer motif popularised by Goethe and 18th Century German literature. Both instances retain something of the original character and use, but are changed and reimagined in Rammstein's work.

[Leaving out a lot of analysis...] I conclude that Rammstein exhibit an assumed authority stemming from their asserted Germanness to manipulate German literary references to better suit the desires and characteristics of their own homeland. Rammstein has become for its members their own Heimat, that is a theatrical and performative site whereby the German literary canon is adapted into this third space. The Rammstein Heimat rejects the emergence of female power, promoting masculine unity and strength, and the band members are eternal wanderers following the collapse of their home in the GDR.

I received really helpful feedback on my paper, and incited some intense discussion surrounding Rammstein's gender politics and the role of 'home' in pop music.

My research focuses on the difficulties trying to pin-point where exactly Rammstein's Heimat (roughly 'home') can be found. All the band members are from East Germany, and many still identify as "East German", even though the GDR no longer exists.