This week, the UK’s furlough scheme will come to an end, bringing new uncertainty for many workers across the country just as Universal Credit rates are reduced.

The scheme aimed to retain the link between employers and employees through the economic uncertainty created by the pandemic, allowing workers and businesses to pause activities, retain workers and re-open as restrictions eased and demand picked back up. This largescale Government subsidisation of wages is a unique occurrence within living memory. At its peak in May 2020, the scheme the scheme supported 31% of eligible jobs, amounting to nearly 8.9 million people. Although this fell steeply as restrictions eased, the latest available data indicates the value of the scheme, with 1.6 million workers on furlough at the end of July 2021

The scheme has played an important role in buffering unemployment numbers. In April 2020, the Office for Budget Responsibility set out a coronavirus reference scenario in which unemployment was forecast to rise up to 10%. Yet since the onset of the pandemic, the highest unemployment level was observed during October-December 2020 – at 5.2%., It remains to be seen whether we will now see unemployment increase as the scheme ends this Thursday 30th September. Some workers may have been on furlough from the start of the pandemic, weakening the link with their employer and the labour market more generally. Additionally, as demand in some sectors remains below pre-pandemic levels, some roles may no longer be viable.

Certain sectors and places were particularly affected by restrictions and reductions in demand during the pandemic, and as a result relied more heavily on the furlough scheme. In April 2020, hospitality businesses (accommodation and food services) furloughed approximately 95% of their workforce across the country. At the end of July 2021, an estimated 15% were still furloughed. Similarly, the arts and leisure sector furloughed 91% of its workers during the first lockdown, and 15% were still furloughed at the end of July this year. 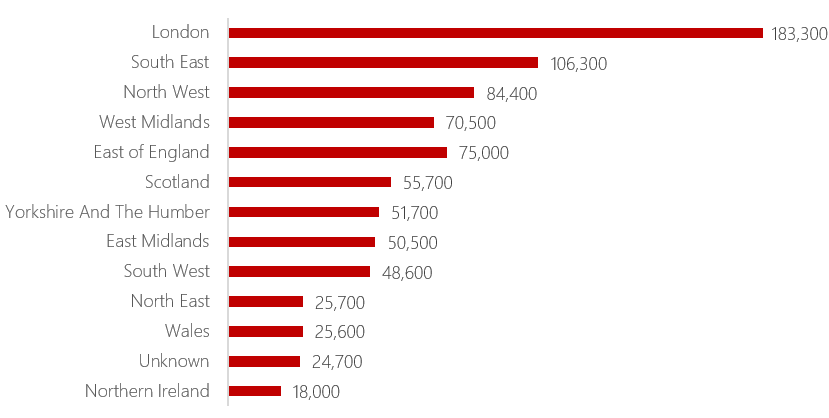 Previously, our analysis with Cambridge Econometrics highlighted that take up of furlough was particularly high in areas home to industries badly affected by lockdown and changes in consumer demand. Crawley is a case in point: a: a town heavily reliant on Gatwick airport for employment opportunities. Crawley has seen rates of furlough among the highest in the country. Our research found that economic productivity is expected to decline in Crawley by a significant margin as a result of the pandemic.

The aviation sector is still operating far below pre-pandemic levels. Indeed, 51% of jobs in passenger air transport were on furlough as of July this year. Travel operator businesses (travel tour and tour activities) is also an industry with a high share of its workers on furlough, at 46%. Travel restrictions remain in place for many countries and demand for international travel is still well below pre-pandemic levels. There is a strong case for extending furlough for specific sectors still impacted by the pandemic, such air travel and tourism, to avoid acute rises in unemployment in some parts of the country.

The entertainment industry (creative; arts and entertainment activities) is also reliant on furlough - with 28% of its workers currently supported by the scheme. The on-going impact of social distancing measures, and health concerns, have resulted in lower consumer demand for live performances and entertainment – with many large events planned for 2021 having been cancelled.

Some roles currently supported by furlough may no longer be viable - with affected workers needing to transition in to new roles. But now is not the right time for a blanket removal of the scheme. Some sectors will be unable to resume activities without the reassurance of additional support through the uncertainties ahead. As we enter into winter, there is a distinct possibility that public health restrictions will be re-imposed. It’s also the case that public perceptions of safety mean it will take time before people revert back to previous patterns of consumption and activities. Removing furlough in its entirety presents acute risks to the industries most affected by social distancing measures.

Only with the guarantee of further support will these sectors be able to retain staff through what remains likely to be an uneven and uncertain recovery.

The adoption of a targeted approach for organisations in sectors still affected by reduced demand with an increased employer contribution that would serve to buffer the sectors most affected by the pandemic while ensuring the roles supported are truly viable for the future.

For furloughed workers in those sectors less directly impacted, proactive support may be needed to mitigate the risk of falling into unemployment. It remains to be seen whether the thousands of workers currently furloughed will be absorbed back into their original roles, and how many are at risk of losing their jobs. Despite vacancies having risen sharply in recent months, it is unrealistic to expect a seamless transition for workers moving from furlough into alternative work. Although some sectors are expanding, they are not necessarily suitable to absorb excess labour due to job-skills mismatches. A large proportion of the vacancies available are for specialist roles, such as HGV drivers, and many represent unappealing propositions due to poor terms and conditions.

The Spending Review, to be delivered in October, represents an important opportunity to ramp up investment and policy focus on employment support. This should include an expansion of Restart/Jobcentre Plus provision to offer targeted advice and guidance to furloughed workers, usually restricted to those who have made a claim or are receiving Universal Credit or other means tested benefits. Workers will require a range of assistance, particularly with the £20 Universal Credit uplift shortly being removed. It is vital that the achievements of furlough are not undone through exposing workers to insecurity and putting them at greater risk of falling out of the labour market, as we move in to what threatens to be a testing winter.