I work in postcolonial literatures and theory in comparative frames, with interests in African, Caribbean, and Middle Eastern (especially Palestinian) writing. I've published recent articles in Interventions, ariel, The Cambridge Companion to the Postcolonial Novel (ed. Ato Quayson), and Mosaic.

My first book, Romanticism and Aesthetic Life in Postcolonial Writing (2018, Palgrave Macmillan), explores the afterlives of Romantic aesthetics in a group of postcolonial writers now central to the postcolonial canon, in a range of modes and locations, including J. M. Coetzee, Derek Walcott, and Gayatri Spivak. The book aims to develop an account of the migratory power of Romanticism from a postcolonial vantage point that challenges existing accounts of the relationship between colonial and postcolonial corpuses, and to explicate, via its engagement with Romanticism, the postcolonial concern with aesthetic life, understood as an experiential domain involving literary tradition, colonial and environmental history, landscape, and the immediacy of the phenomenal world. https://www.palgrave.com/gp/book/9783319703404

Increasingly my research explores the intersections between postcolonial literary studies and the environmental humanities. My new book project is organised around the figure of enclosure, which I read as a globalizing logic of objectification towards land, resources, and human and animal bodies, and as the basis for a dominant orientation towards space and environment. The project exhibits my interest in the relationship between material histories of power and literary and cultural production, and at the same time tries to mobilise enclosure not "just" as a history but also as a figure for thinking about larger colonial logics and ways they might be contested and reimagined.

I am also involved in an ongoing project about animism, and I'm currently co-editing, with Sam Durrant, a special issue of New Formations on this theme.

I joined Lancaster in May 2017 from Columbia University, where I held a postdoctoral fellowship funded by the Social Sciences and Humanities Research Council of Canada (SSHRC). I completed my PhD at the University of Toronto, where my thesis won the A. S. P. Woodhouse Prize, and I hold BA and MA degrees from the University of Leeds.

I am on research leave in Michaelmas term of 2019, and in Lent 2020 will be teaching Contemporary Literature and a half-unit on Postcolonial Environments.

I would welcome research proposals in postcolonial literatures, especially at the intersections with the environmental humanities, theory (broadly construed), or romanticism.

Empire of Language: Toward a Critique of (Post)colonial Expression By Laurent Dubreuil
Dickinson, P. 1/04/2017 In: The Cambridge Journal of Postcolonial Literary Inquiry. 4, 2, 2 p.
Book/Film/Article review 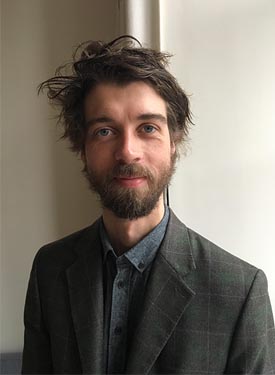