The intestinal epithelium offers the first interaction between commensal bacteria, pathogens and our bodies’ largest immune system. Inappropriate immune responses drive inflammatory bowel disease (IBD) or excessive inflammation during infection. My research focuses on the epithelial enteroendocrine cells (EECs), which release peptide hormones in response to nutrients allowing their efficient digestion. EEC alterations are strongly associated with inflammation, yet the possibility of interactions between our gut’s endocrine and immune systems remains overlooked. Understanding the mechanistic cross-talk between enteroendocrine and immune cells will identify the immunoendocrine axis as a key feature of intestinal health which could be therapeutically targeted during disease.

The intestinal epithelium represents one of the body’s most important interfaces with the external environment, not only as an essential point of detection and absorption of nutrients, but also acting as an efficient barrier against the plethora of toxins and microorganisms we encounter on a daily basis. Indeed, the intestinal epithelium offers the first interaction between pathogens and our body’s defences and as such harbors the major immune system of the body. My research focuses on the often neglected enteroendocrine cells (EECs) of the epithelium, which despite only comprising 1% of the epithelium; collectively form the largest mammalian endocrine system. Regulatory peptides and amines are released from EECs in response to luminal nutrients, and have classically been studied in terms of their role in controlling feeding centres in the brain via stimulation of the vagus nerve. However, the possibility that they play a role in orchestrating the immune response remains largely overlooked. Indeed, recent studies have implicated a role for EECs in innate immunity as they possess functional Toll like receptors and alterations in EEC numbers and secretions are well associated with intestinal infections.

My work focuses on understanding the interactions between our gut’s endocrine and immune systems during homeostasis and inflammation. I utilize intestinal infection models as well as in vitro studies to dissect the mechanistic interaction between these diverse systems to potentially inform new EEC-derived therapeutic strategies for inflammatory diseases of the intestine.

After receiving my BSc in Biology from Nottingham University in 2002, I became a Research Technician in Professor Grencis' lab at The University of Manchester. I soon became fascinated with host-parasite interactions of the enteric environment and after completing a short research technician post in endocrinology went on to pursue a PhD in 2004, under the supervision of Professor John McLaughlin. After receiving my PhD in 2008, entitled 'Molecular mechanisms of the gut immune systems and effects on nutrient sensing cells', I joined the lab of Dr Mark Travis in the Wellcome Trust Centre for Cell Matrix Research, examining the role of the integrin avß8 on dendritic cells during infection and autoimmunity. I moved with Mark to the newly established Manchester Collaborative Centre for Inflammation Research in 2012 for a second post-doc, establishing an essential role for avß8 integrin on regulatory T cells during autoimmunity. In 2014, I was awarded a Wellcome Trust funded stepping stones fellowship at Manchester to help establish my own lab, before accepting a lectureship in Infection Biology at Lancaster University in 2016.

Honarary Lecturer at the University of Manchester

I am happy to accept proposals on projects in the area of intestinal inflammation focussing on parasitology, immunology and endocrinology.

Dual morbidities in the developing world: The effect of obesity on susceptibility to nematode infection
01/12/2019 → 31/05/2021
Research 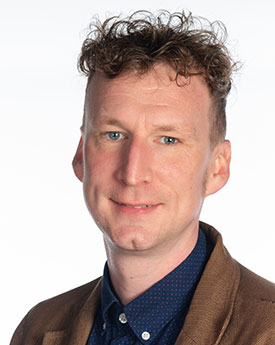