My research interests lie in 'Environment and human health' with expertise in molecular microbial ecology/environmental microbiology. I am particularly interested in non-tuberculous mycobacteria and their environmental routes for human exposure. Of main interest is Mycobacterium avium subspecies paratuberculosis (Map) which causes inflammatory bowel disease (Johne’s disease) in the majority of animals. With collaborators, we are examining Map’s role in Crohn’s disease, a similar human inflammatory condition. Map is significantly associated with this crippling disease and we seek to ascertain whether it is the cause. Other interests include: antibiotic resistance in the natural and hospital environments, gene transfer in the environment and diversity of bacteria in bird guts and in those involved in bee nutrition.

Examples of my research include:

The rulAB operon of Pseudomonas spp. confers fitness traits on the host and has been suggested to be a hotspot for insertion of mobile elements that carry avirulence genes. Here, for the first time, we show that rulB on plasmid pWW0 is a hotspot for the active site-specific integration of related integron-like elements (ILEs) found in six environmental pseudomonads (strains FH1–FH6). Integration into rulB on pWW0 occurred at position 6488 generating a 3 bp direct repeat. ILEs from FH1 and FH5 were 9403 bp in length and contained eight open reading frames (ORFs), while the ILE from FH4 was 16 233 bp in length and contained 16 ORFs. In all three ILEs, the first 5.1 kb (containing ORFs 1–4) were structurally conserved and contained three predicted site-specific recombinases/integrases and a tetR homologue. Downstream of these resided ORFs of the ‘variable side’ with structural and sequence similarity to those encoding survival traits on the fitness enhancing plasmid pGRT1 (ILEFH1 and ILEFH5) and the NR-II virulence region of genomic island PAGI-5 (ILEFH4). Collectively, these ILEs share features with the previously described type III protein secretion system effector ILEs and are considered important to host survival and transfer of fitness enhancing and (a)virulence genes between bacteria.

Mycobacterium avium subspecies paratuberculosis (MAP) is a member of the Mycobacterium avium complex. Ithas the specific ability to cause chronic inflammation of the intestine, or Johne’s disease (JD), which can affect many animal species, including primates. This chronic enteric pathogen is significantly associated with chronic inflammation of the intestine of the Crohn’s disease (CD) type in humans

Subclinical infection is widespread in domestic livestock, especially cattle, sheep, and goats. Infection and disease are now spreading worldwide with Europe and North America being particularly affected. It is estimated that the herd prevalence for JD in cattle in the USA is 68% and 32% in UK. Both clinically and sub-clinically infected animals can shed MAP in variable numbers on to pasture in their faeces, depending on the animal, the pathogen strain and the disease characteristics). The organismcan survive for many months in agricultural slurry and in the wider environment

As with other potentially zoonotic pathogens rain falling onto pastures contaminated with M. avium subsp. paratuberculosis washes it into surface waters and into rivers. Previously, we showed that MAP was present in 39% of samples taken from the river Taff (Cardiff, South Wales, UK) and its presence was predictable from rain fall patterns and river flow. Furthermore deposition and transport from the catchment was extensive in that MAP was maintained in the river for several weeks at a time and was a consequence of the endemic presence of MAP in cattle in the Taff catchment. Pickup and co-workers (2006) modelled the main human exposure routes of MAP and suggested that although driven by shedding from clinically and sub-clinically infected animals, the presence and distribution of MAP in the environment may also be influenced by other factors such as slurrying, soil redistribution from water treatment that recycle MAP back from the catchment to the river.

Furthermore, Cardiff has one of the highest incidence of CD in the UK with a corrected incidence for the decade (1996-2005) of 6.6 per 105 population per year (with a 95% confidence interval of 58-76) with the concomitant increase in incidence in children under 16. This compares with 5.5 per 105 population per year (with a 95% confidence interval of 44-68) for the period 1991-1995, 5.9/105/year for 1986-1990 and 5.0/105/year over the period from 1976 to 1980 (Rose et al 1988). The epidemiological study carried out by Mayberry and Hitchens in the late 1970s examined the incidence and geographical distribution of Crohn's disease and ulcerative colitis in 25 electoral wards in the city of Cardiff. They found a statistically highly significant (P < 0.001) increase in the incidence of Crohn's disease, but not of ulcerative colitis, in 11 of the city wards. Although eight of these high-incidence wards bordered the river Taff, their apparent geographical relationship with the river was not statistically significant. The topography of the approaches to the southwest aspect of the river is characterized by hills to the north and south. The valley in between, open to the prevailing winds, is directly opposite the gap in the center of the high-incidence wards on the windward bank of the river. On the leeward side, three additional high-incidence wards lie immediately adjacent to those bordering the river to the northeast. Pickup et al (2005) suggested that this is the direction in which aerosols containing M. avium subsp. paratuberculosis would be carried on the prevailing southwesterly winds and proposed that aerosolisation of Map this exposure route as an explanation for the observed disease clusters around the river Taff. We continue to examine the environment factors that influence the epidemiology of Crohn’s Disease.

Ultimately we wish to progress towards a multidisciplinary program of research designed to inform future policy decisions with quantitative data on the level of environmental contamination by MAP and provide the essential quantitative basis for future testing of the efficacy of potential remedial measures such as the use of new generation veterinary vaccines to minimise environmental contamination and cycling. However, in order to achieve this we have to understand the fate and behaviour of MAP in a number of environmental compartments as specified by our model (see reference; for instance, rivers, sediments, aerosols) through quantification and source identification in order to test the hypothesis that Mycobacterium avium subspecies paratuberculosis contaminating environmental compartments constitutes a significant and incremental threat to human health.

M. immunogenum, a known human pathogen is a recently described species and has as closest relatives M. chelonae, M. abscessus. Collectively these bacteria form the M. chelonae complex. In recent years M. immunogenum has been implicated in the causation of hypersensitivity pneumonitis (HP) in automobile workers and other occupational workers exposed to metal working fluids. The early detection of M. immunogenum and related bacteria may be important in the possible prevention of HP. Since developing a highly specific quantitative PCR detection method, our interests now focus on its source, diversity and role in hypersensitivity pneumonitis.

Current and developing projects in my laboratory include:-

1999-2005 : Visiting Professor, Department of Genet. and Microbiol, University of Liverpool 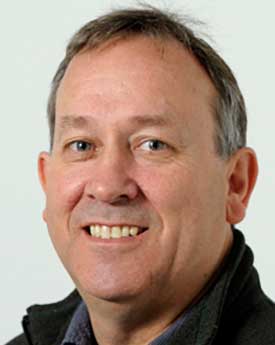