Books and other publications

Papers: Around fifty papers in a wide range of journals like Philosophy East and West, Journal of Indian Philosophy, Ageing and Society, Contemporary South Asia, Journal of Hindu Studies, etc., and edited volumes.

Indian Philosophy and the Consequences of Knowledge: Themes in metaphysics, ethics and soteriology Ashgate, Aldershot, 2007

Divine Self, Human Self. The Philosophy of Being in Two Gita Commentaries, Bloomsbury, New York, 2013 Winner of the Best Book 2011-15, Society for Hindu Christian Studies

1. I am working on a book project on developing a philosophical anthropology of emotion through a reading of classical Indian narrative and aesthetic texts.

2. I am also discussing with colleagues in the UK and US a framework for comparative classical studies that can help us think historically and conceptually across different 'classical' traditions (initially India and Europe) while also opening up a critical evaluation of the notion of the 'classical' itself.

3. Contemplative practices and mental health: My colleague in clinical Psychology, Prof Fiona Lobban and I are seeking to explore the role and relevance of the philosophical framework concerning the sense of self for popular, but decontextualized practices like mindfulness and yoga in mental health therapy today.

Recent and past research projects:

5. Dialogue and its possibilities: I was CI on an AHRC project with Brian Black (PI), 'In Dialogue With the Mahābhārata', 2016-18, which focussed on the implications of the many and varied dialogues narrated in that the great Sanskrit composition. From careful textual and contextual study, we sought to open up the study of dialogue and its purposes, not only in other Indian compositions and genres, but cross-culturally.

6. Religion and politics, with a focus on the theoretical possibilities offered in interpeting political and public religion in the world, outside the constraints of the modern liberal Western experience, especially through a comparative theological analysis of the politics of secularism. In the more specific area of religion and identity in Britain, I worked under a Home Office Grant with Gwen Griffith-Dickson of the Lokahi Foundation, London, to develop an account of integration of Hindus and Muslims into British society. My interest in the role of comparative theology in the political understanding of secular society has led toworking withthe Hindu-Christian Forum in the UK under the auspices of the Office of the Archbishop of Canterbury, and chairing the then-Archbishop's engagement with Hindu religious teacher-leaders in India in 2010. My project, 'Religion, Immigration and Integration', ran within the ESRC funded Centre for Corpus Approaches to Linguistics at Lancaster University, within which I was a CI (PI, Tony Mcenery): http://cass.lancs.ac.uk/, with Carmen Dayrell as Research Associate.

7. Comparative study of Indian and Chinese philosophies, especially on the issues of self and knowledge. I was the founding co-chair of the Comparative Studies in the Philosophy and Religion of India and China Group at the American Academy of Religion Conferences starting in 2011. This followed a successful five-year Seminar Series on the same topic. I also sit on the Board of the Working Papers Series on India and China of the India-China Institute at the New School, New York.

8. Theories of self: I was PI on a major AHRC research project: Self: HinduResponses to Buddhist Critiques (http://www.lancs.ac.uk/fass/projects/self/index.htm) (2008-11). My work for this project was primarily on i) arguments for the diachronic unity of consciousness and the relationship between subject unity and theories of self; ii) the relationship between personal identity and the unity of consciousness, especially with regard to memory; and iii) the theological and ethical dimensions of Hindu conceptions of human and divine self. An outgrowth of this project, tied also to some elements of 3., below, has been an interest in the neurophilosophical aspects of meditative states, focussing on the conceptual debates about consciousness and selfhood between Hindu and Buddhist practices of meditation. In this regard, I have worked with members of the Mind Life Institute, after presenting papers on Hindu theories of consciousness and contemporary neuroscientific and cognitive scientific issues at Mind Life Institute's first major public conference in India in the presence of HH the Dalai Lama.

I studied Politics, Sociology and History at the Sri Sathya Sai Institute for Higher Learning in India, and took a doctorate in Philosophy at Oriel College, Oxford. I taught at the National University of Singapore and held Research Fellowships at Trinity College, Oxford and Clare Hall, Cambridge before joining Lancaster. I have also been Visiting Fellow at Benares Hindu University, Ecole Francaise d' Extreme Orient, Pondicherry, De Nobili College, Pune, and Loyola Marymount University, Los Angeles and the National Institute for Advanced Studies, Bangalore.

I have a range of interests in global and comparative studies. I sit on the academic advisory council of the Oxford Centre for Hindu Studies, and I am a Senior Fellow of the Mind Life Institute. I also previously sat on the academic council of the Global Religion and Ethics Forum and I was Asia advisor for the Templeton Foundation's Global Perspective on Science and Spirituality Programme, 2004-6, and sat on the Board of the Society for Asian and Comparative Philosophy, 2009-11.

I served as the South Asia Reviews Editor of Philosophy East and West (2004-14); and sit on the editorial and advisory board of the Online Forum of the Society for Asian and Comparative Philosophy, Blackwell Compass Religion, Diskus, the online journal of the British Association for the Study of Religion, and Fu Jen International Religious Studies.

I am General Editor for Mysticism and Spirituality for the Oxford Research Encyclopedia for Religion, and Editor of the Bloomsbury Research Handbooks on Asian Philosophy.

'Decolonzing Philosophy', Debate for the Insititute of Art and Ideas, HowTheLightGetsIn Festival, Hay-on-Wye

'Who Am I?' Lecture on Self and Consciousness, Gresham College

October 2010: I chaired a private and a public meeting of the Archbishop of Canterbury's meeting with traditional Hindu teachers and leaders in Bangalore.

November 2010: I took part in the Mind Life Institute's public conference on neuroscience and meditation in Delhi, in the presence of HH the Dalai Lama.I presented two papers, one on general challenges facing the neuroscientific study of Indian meditative practices and the role of a proper understanding of the classical philosophical arguments that inform those practices; and the other on the specific Hindu school of Advaita Vedanta.

December 2010: Together with my colleague Dr Brian Black, and former colleague Dr Irina Kuznetsova, I conducted a workshop at Gresham College where we sought to present to a wider audience some key findings from the AHRC major research project, Self: Hindu Responses to Buddhist Critiques.

'The Liberal and the Plural', lecture at Gresham College

Here are links to some episodes in In Our Time in which I have participated:

A documentary on the Kumbh Mela

BBC Radio 4, Beyond Belief. On Space

Being Hindu and/or governing India? Religion, social change and the state.
Ram-Prasad, C. 2002 In: The freedom to do God's will : religious fundamentalism and social change. London : Routledge p. 159-196. 38 p.
Chapter 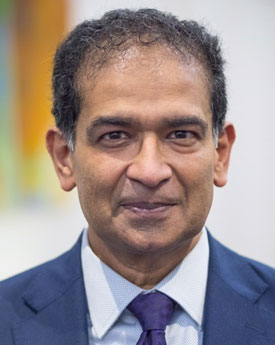