Near-field thermal and spectroscopic microscopy Fundamental research into the thermal properties of materials on the nanoscale has led to a new generic scanning technique - Scanning Thermal probe Microscopy (SThM) - where thermal modes of imaging at the sub-micron scale are complemented with localised analysis. A cantilever with an ultra-miniature resistive element on its tip can act either as a temperature sensor or as a point-like heat source. This is used to locally provide and monitor thermal flux to the material surface as well as to record the surface topography. Individual regions of a solid sample are selected by means of surface or even sub-surface imaging to combine spatial discrimination and chemical fingerprinting using calorimetry, thermomechanometry, infrared spectroscopy, or pyrolysis mass spectrometry. Patented technology has led to the development of instruments including micro- and nano- thermal analysers and photothermal nano-infrared spectrometers. These have been used in a wide range of situations ranging from polymer technology to biomedical studies. Here, the samples to be characterized can be inhomogeneous, with structural detail at the sub-micrometer level. The researcher often faces the task of chemically mapping the individual components or detecting subtle spatial variations in their molecular composition.

The wider beneficiaries include a variety of scientific and industrial end users of the technology. Micro-thermal analysis is now being widely used commercially to visualize the spatial distribution of phases, components, and contaminants in polymers, pharmaceuticals, foods, biological materials, and electronic materials. For detection of minute compositional differences between otherwise identical samples, our research has also helped develop improved data analysis methods involving chemometrics and/or fuzzy logic. Nano-IR shows particular promise in the biomedical field, wherever the motive is to identify biochemical markers that might serve as diagnostic fingerprints for identifying rogue cells of human tissue. The ability to obtain such a fingerprint, where spectral deviations point to the presence of biomolecular variations between and within cells, has a wide range of potential applications: reducing “false negatives” in cancer screening, post-operative screening, highlighting the severity of disease, and predicting the response of cancer to drugs so that the clinician could tailor the treatment to the individual patient. These markers would consist of certain features of vibrational spectra in the mid-infrared, enabling us to pick out molecular groups of interest. One long-term aim is to develop an automated procedure that might replace the visual procedures involved in cancer screening, with good prospects of very significantly reducing the proportion of false negatives and false positives. 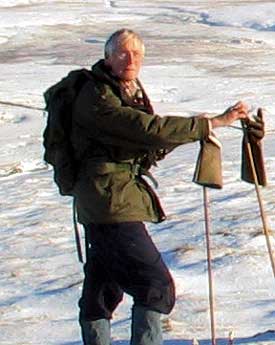