Director of the Cockcroft Institute at SciTech Daresbury

The Cockcroft Institute is an international centre for Accelerator Science and Technology (AST) in the UK. It was proposed in September 2003 and officially opened by the UK Minister for Science, Lord Sainsbury, in September 2006 (although operationally active from April 2004). It is a joint venture between the Universities of Lancaster, Liverpool, Manchester and Strathclyde, and the Science and Technology Facilities Council (STFC). The Institute is located at the heart of Daresbury Laboratory, adjacent to the Daresbury Innovation Centre, and has established satellite centres in each of the participating universities, including a major experimental facility for the investigation of laser-plasma interactions at the University of Strathclyde (SCAPA). Experimental facilities at Daresbury include the CLARA and VELA electron linear accelerators.

The Institute provides the intellectual focus, educational infrastructure and the essential scientific and technological facilities for accelerator science and technology research and development, which will enable UK scientists and engineers to take a major role in innovating future tools for scientific discoveries and in the conception, design, construction and use of the world’s leading research accelerators for the foreseeable future.

The Institute is named after the Nobel prizewinner Sir John Cockcroft FRS . Born in Todmorden in north west England, and educated in part in Manchester, he is regarded as the pioneer of modern accelerator research.

I have been involved in a broad range of activities in experimental particle physics research using high energy particle accelerators and colliding beam machines: design, construction, operation and scientific exploitation of particle detectors & experiments at these facilities (including software and computing resources). Most of my career has been devoted to precise tests of the Standard Model of particle physics in both the strong & electroweak sectors andindirect searches for the top quark & the Higgs boson (the key to understanding the origin of mass); more recently drawn to the search for flavour mixing and CP violation in beauty hadrons and neutrinos (the key to understanding the matter-antimatter asymmetry of the universe). I was a founding member of the Cockcroft Institute for Accelerator Science & Technology when it was established in 2004 and since March 2015 I have been its Director.

I am currently working on the T2K neutrino oscillations experiment in Japan and on the preparations for the DUNE long baseline neutrino oscillations experiment at Fermilab. Previously, I was involved for several years in the design and construction of the ATLAS experiment at CERN’s Large Hadron Collider (LHC) and from 1999 until 2011 on the physics and operation of the D-Zero experiment at the Fermilab Tevatron Collider. Prior to that I worked for nearly twenty years on a series of electron-positron annihilation experiments at centre of mass energies ranging from 3 Gev (CRYSTAL BALL at SLAC) to 46 GeV (TASSO at DESY) and finally to 200 GeV (DELPHI at LEP). My main physics interest during this period was the study of electroweak interactions. Whilst working on DELPHI I served as the Electroweak Physics coordinator and as a convenor of the Tau Physics team. I wrote my PhD thesis on deep inelastic neutrino scattering with the Gargamelle Bubble Chamber at CERN.

The D-Zero experiment was located at the Fermilab proton-antiproton collider, the Tevatron. Lancaster joined the experiment in the Spring of 1999. We were involved in various physics topics associated with b-quark production and have produced a substantial number of new measurements and observations including the first double-sided limit on Bs mixing, and several searches for CP violation. I was one of the co-conveners of the Tracking and Vertexing Algorithms group in D-Zero.

The T2K long-baseline neutrino oscillations experiment consists of a low energy neutrino beam produced at the JPARC facility in Tokai, Japan, a Near Detector (ND280) located 280m from the origin of the beam and a Far Detector (SuperKamiokande) positioned 295Km downstream. The key goal of the experiment was to observe the appearance of electron type neutrinos in the muon neutrino beam and hence measure the last of the three neutrino mixing angles (theta_13). In 2011, T2K observed the first indications of electron neutrino appearance, thereby demonstrating that theta_13 is non-zero (at the 3 standard deviations level) and actually quite large (subsequently confirmed by reactor neutrino experiments). The Lancaster group was responsible for building the 6 ton Downstream Electromagnetic Calorimeter module (DSECal), parts of the rest of the calorimeter and various offline software contributions. The current goals of T2K are to improve its measurements of theta_13 and one of the other neutrino mixing angles (theta_23), measure various inclusive and exclusive neutrino interaction cross sections and search for CP violation in neutrino and antineutrino oscillations. I am the ND280 shift coordinator and a member of the T2K authorship committee.

The DUNE long baseline neutrino oscillations experiment at Fermilab will exploit a proposed new 2.4MW wide band neutrino beam facility, LBNF, at Fermilab. This intense beam will propagate over a baseline of 1300Km from a near detector to a 40 kton liquid argon TPC far detector, located 4,850 feet underground at the Sanford Underground Research Facility (SURF). The principal aims of the experiment are to study CP violation in the neutrino sector and to resolve the neutrino mass heirarchy. The far detector will also have increased sensitivity for proton decay and the observation of supernovae neutrinos.

Head of the Department of Physics, Lancaster University, 2006-2015 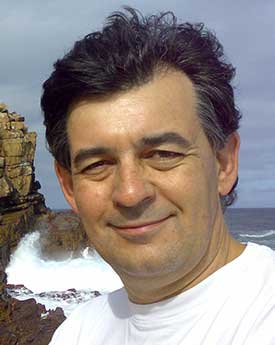