The aim of the Royal Institution Mathematics Masterclasses is to stimulate and encourage young people in the art and practice of mathematics and to develop a sense of enjoyment in the subject. These classes are not intended to match the school curriculum but are instead intended to widen students' areas of mathematical knowledge and interest.

The Royal Institution Mathematics and Engineering Masterclasses are hands-on and interactive extracurricular sessions led by top experts from academia and industry for keen and talented young people all around the UK. The Lancaster-based series complements activities in Cumbria, Ormskirk and Manchester, all of whom provide series for year 9 pupils, as well as providing the next step for attendees of the Primary Masterclass series in Milnthorpe.

Participants need enthusiasm and persistence as well as mathematical ability. It will be a rare student who understands all the material completely at a first hearing; sticking power is needed to come back for more and to take home the notes and try again.

Our first Masterclass series ran in Spring 2014 and have run annually since. The classes take place over six Saturday mornings and pupils in years 10 and 11 will be nominated for participation by their schools in the autumn.

The 2014 programme of classes at Lancaster was organised on the theme of "Networks", looking at how pure and applied mathematicians and statisticians study interconnected systems. Four of the classes were delivered by academics from Lancaster University and two by guest speakers from outside the university.

In the classes, the pupils looked at how mathematics can solve problems from the practical, such as how companies should organise distributing stock between many locations, to the theoretical, including studying shapes in four or more dimensions. They learned how to use probability to survive a zombie apocalypse and how to estimate how big the Universe is. Even brain-swapping made an appearance, in a fun exercise based on the TV show "Futurama".

The reaction to the Masterclasses has been very positive with pupils saying that maths "gets a lot more complicated but interesting". They particularly appreciated finding out that "there is a lot more to [maths] than just numbers" and many were surprised to learn "just how much maths there is and how it is related to almost everything".

Financial support from the Faculty of Science and Technology allowed the purchase of new equipment and resources, as well as enabling visits from the two external speakers.

The series from 2015-present

The series that followed have featured some of the same topics as 2014 along with a few new ones. In 2015 and 2016 we were privileged to have Dr James Grime talk to us about the Enigma machine and code-breaking. James brought along one of the very few surviving original Enigma machines to demonstrate how it worked.

We also heard from about the design of clinical trials, featuring a mock clinical trial with the students as patients and about rigidity and flexibility in frameworks. Guest speakers in 2017 have included Sam Durbin from the Royal Institution and Liz Meenan on the mathematics of paper folding while talks from our own academic staff have introduced students to concepts from topology to infinity.

About the Royal Institution

The Royal Institution (Ri) has been at the forefront of public engagement with science for over 200 years and its purpose has always been to encourage people to think further about the wonders of science. It runs a national programme of Masterclasses for young people in mathematics, engineering and computer science, educational activities at the L’Oréal Young Scientist Centre and policy discussions with science students, an annual calendar of public events and the famous CHRISTMAS LECTURES®. And through its critically acclaimed science video platform, the Ri Channel, it shares the stories behind cutting-edge science with people around the world. 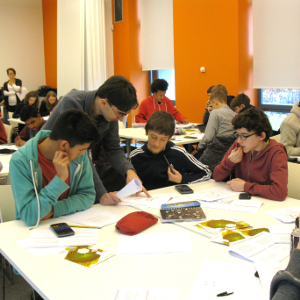 Image used with kind permission of the Royal Institution.

You don't learn this at school and it's really interesting. I loved the interactive lessons and I have gone home and researched more.