Senior Lecturer in Algebra and Geometry

Assistant Dean for Engagement, Faculty of Science and Technology

My research is in the area of quantum algebra. Here "algebra" refers to the major branch of mathematics that studies the structure of mathematical objects and their symmetries. The adjective "quantum" highlights a relationship with the quantum theory of physics. In the mathematics of that theory, many of the variables do not commute - that is, a times b need not equal b times a. Many of the structures in quantum algebra have a multiplication that is not commutative. The ones I study are often not far from being commutative, though. One can often deform a commutative product of two elements a and b by putting in an extra parameter, q say, and changing the product so that now ab=qba. Then ba=(1/q)ab and if q does not equal 1, the product is not commutative. We can think of being allowed to vary q and talk of q=1 as the "classical limit", just as classical physics can be recovered from quantum physics. The study of these deformations of well-understood classical algebraic and geometric objects is what makes up the field of quantum algebra.

April 2006: PhD in Mathematics, Queen Mary, University of London, under the supervision of Prof. Shahn Majid.

Carnegie Research Assessor, Carnegie Trust for the Universities of Scotland

Geometric and Homological Methods in Representation Theory
Participation in conference

29th meeting of ARTIN (Algebra and Representation Theory in the North)
Participation in workshop, seminar, course 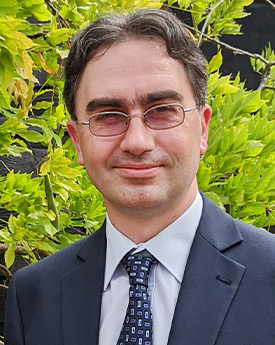