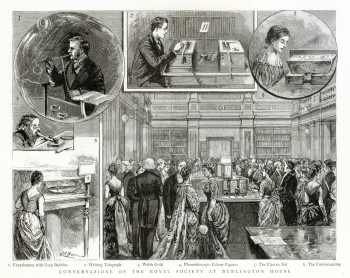 This collaborative project, which started in 2017, charts the evolution of the nineteenth-century phenomenon of Royal Society soirées - exhibitions and events showcasing technological, scientific, and cultural innovations for the future - from their peak in the mid nineteenth century until after the first world war. The project explores the influence of soirées on the development of collecting and display practices in national museums. It will include digitisation of the Royal Society soirée programmes.

This PhD studentship explores gender and the role of women at the soirées from the mid 19th to the early 20th century.

If one of these projects sparks your interest, or you would like to support us, contact us on the-ruskin@lancaster.ac.uk

Killing at a Distance

The Eye of the Mountain

Drawn from the Ground