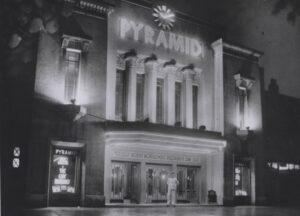 Photograph of the Pyramid taken by Douglas Rendell

In the 1930s, Manchester in the North West of England was an important centre of the textile industry–and home to many cinemas, old and new: just before the supercinema boom, the city boasted 109 cinemas, ‘one for every 7,000 persons’.[1] Cinema Culture in 1930s Britain visited the Greater Manchester area[2] in the Spring and Summer of 1995 to conduct interview field work. Many of those taking part had heard about the project earlier in the year via announcements and articles in local and regional media outlets,[3] while others had been recruited through contacts with local history societies, reminiscence groups, homes for the elderly, and the like. Because of its association with Mass Observation’s 1930s ‘Worktown’ project, targeted efforts were made to recruit participants in the town of Bolton.

From these contacts, twenty-two core informants were identified, with years of birth ranging between 1906 and 1926 (selection was based roughly on national 1930s social class demographics and the gender profile of 1930s cinemagoers). Half of this number were based in Bolton: of the Bolton group seven were female and four male; three were occupationally working class, three were working/lower middle class, and five middle class. Of the eleven interviewees based elsewhere in Greater Manchester (including–besides the city of Manchester–Altrincham, Bury, Prestwich, and Sale) seven were female and four male; while nine were occupationally working class and two middle class.

Research Fellow Valentina Bold made two visits to Greater Manchester to conduct interviews. Between 24 April and 17 May 1995, she met all twenty-two core informants, some of them in group settings. Her second visit, between 25 May and 13 June, involved follow-up interviews with twenty of them. Finally, in May 1996 she made a flying visit to catch up with one of the remaining two participants. All but one of the twenty-two Greater Manchester core informants were therefore interviewed twice.

Some distinctive tastes and preferences emerge from these interviews. Nelson Eddy and Jeanette MacDonald–with a core of avid fans in Bolton–are among the best-loved film stars. Film personalities highly rated for their acting skills include Edward G. Robinson, Spencer Tracy, James Cagney, and Bette Davis. Jewish informants particularly like Charlie Chaplin. Stars disliked by some informants include Ginger Rogers and the “sick-making” Shirley Temple. Appreciative reference is made to Robert Donat, a Mancunian with a “lovely voice.” Blonde actresses are remembered by male informants for their sex appeal, actors with moustaches (Clark Gable and Ronald Colman in particular) by the women.

[1] ‘Manchester’s 109 Kinemas’, Kinematograph Weekly, 22 March 1934.
[2] Aside from the city of Manchester itself, the Greater Manchester area takes in numerous surrounding towns, villages and suburbs. List of All the Towns in Greater Manchester (knowhere.co.uk) (accessed 3 February 2022). Sale does not appear in this list, though it is part of Greater Manchester.
[3] These included BBC Radio North, The Big Issue Northwest, Manchester Evening News, South Manchester Reporter, Cheadle and District Advertiser, Bolton Evening News.