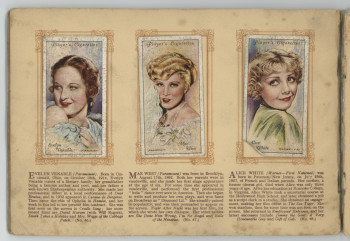 A page from the Player Cigarette Cards album, donated by Margaret Young

In November 1992, Margaret Young (nee Stevenson), a regular cinemagoer in Glasgow in the 1930s and 1940s, saw Annette Kuhn's announcement in the local press of a screening and discussion event about 1930s cinema at the Glasgow Film Theatre. She responded, expressing interest but regretting that she would be unable to attend. In reply, she was sent a short questionnaire about her past cinemagoing, which she shared with her sister, Mollie Stevenson. Both the sisters submitted detailed replies, and both eventually joined Cinema Culture in 1930s Britain's seventeen Glasgow-based core informants. They were born in Glasgow--Mrs Young in 1925 in Riddrie, Miss Stevenson in 1923 in Broomhill--and both had lived in the city all their lives. Their father was a commercial traveller, their mother a housewife. Mrs Young left school at seventeen and took a job as a shorthand typist, leaving paid work when she had her children. In her forties, she embarked on a career change and trained to be a teacher. On leaving school at fourteen, Miss Stevenson took up secretarial work, and worked at Burma Oil for more than thirty years. The sisters were interviewed together at Mrs Young's home in Cambuslang, Glasgow on 5 December 1994 and 20 February 1995. Mrs Young subsequently donated a number of items of memorabilia to the project, including a notebook containing lists of favourite stars and films seen between 1939 and 1944, her collection of film star cigarette cards, and several 1930s and 1940s fan publications about films and film stars.

Mrs Young and Miss Stevenson's first interview ranges over their early lives and their cinemagoing memories, with descriptions of the cinemas they remember going to as children, including one where high teas were served at seat. They recall waiting in long queues outside cinemas and being entertained by buskers and kept in order by commissionaires. They detail ticket prices, singsongs, and rowdy behaviour in children's matinees; and call to mind their intense enjoyment of film magazines as teenagers: "we devoured them." Mrs Young presents the notebook in which she listed and rated all the films she saw during the second half of 1939. They talk about the British stars they liked, including Jessie Matthews and Anna Neagle, and draw comparisons between the American and British film industries. They allude to some of the hazards of cinemagoing during WW2: "We weren't deterred by the blackout: we went with our torches." There is further discussion of Glasgow cinemas, and amused recollections of arguing over film magazines and star photos. They reflect on the musicals they enjoyed and their admiration for stars like Deanna Durbin (“lovely singer, lovely clothes”) and her hat "with a wee feather", and Ginger Rogers and Fred Astaire ("great tunes, great melodies"). In their second interview, the sisters again recall their enthusiastic consumption of film magazines and books, referring to the publicity surrounding the film The Adventures of Robin Hood and exploring the particular appeal of its star, Errol Flynn. They discuss their film and film star preferences, expressing appreciation for both good acting and 'frothy' films. They talk about British actors who worked in Hollywood and about some favourite male stars and their films, and revisit the topics of Glasgow cinemas and the Hollywood musicals that they enjoyed.
Audio-synced interview (1 of 2)|
Interview transcript | Listing of cinemas, films and stars mentioned
Audio-synced interview (2 of 2)
Interview transcript | Listing of cinemas, films and stars mentioned