Corina started her academic career at Lancaster as lecturer in 2004, and senior lecturer in 2010, to become in 2017 the first female Professor in the School of Computing and Communication. Prior to joining Computing Department she was a scholar reading for a PhD in Computer Science at the University College Dublin, Ireland. Her previous studies include a MA in Industrial and Organisational Psychology from the Babes-Bolyai University of Cluj-Napoca, Romania, a BSc in Mathematics and Computer Science, and a BA in Psychology, from the "Lucian Blaga" University of Sibiu, Romania, where she also worked as Assistant Professor.

Corina has outstanding track record in earning research income and managing large scale interdisciplinary networks (over £10.5m, with over £6m as PI). She regulary acted as Associate Chair for both the ACM CHI and DIS conferences, and since 2018 she joined the prestigious Editorial Board of the ACM Transactions in Human-Computer Interaction Journal.

Member of the Executive Committee of the British HCI group for British Computer Society: promoting the education and practice of HCI and supporting HCI people in industry and academia, contributing to the development of programme of events, overseeing the group budget and liaising with the BCS financial officer.

Lecturer in HCI, School of Computing and Communications, Lancaster University, 2004-2010

My research focuses on investigating, designing and evaluating technologies which aim to make a difference in people’s lives. I see technology as a means to an end, either for studying and understanding human behaviour, or as a tool for supporting people to reach their potential. More specifically, I am investigating high level skills acquisition and training. For this, particular areas of interest are designing methods and tools to explore and train creative problem solving in the design process. I am also interested in reflective thinking and design practice and how wearable sensors and lifelogging technologies can assist this. The interest in autobiographical reasoning exploits the findings from memory technology and narrative psychology to support people to develop cohesive self-narratives. Not at least, a long-term interest from my PhD studies is exploring the role of virtual environments in acquiring and assessing spatial skills and strategies.

Previous member of the Executive Committee of the British HCI group, and past chair of the HCI conference

I am interested in supervising PhD projects in HCI-related areas, particularly those pertaining to my research interests.

Dean's Awards in Faculty of Science and Technology: Highly Commended Nomination for Researcher of the Year 2019
Other distinction 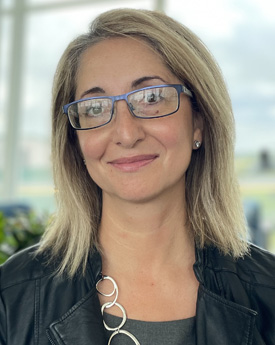