Hello! If you’re reading this, you’ve come across my second blog for my role as Digital Content Ambassador for Lancaster University. In dramatic contrast to my last entry which focused on what it's like to study Film at MA level, this one is going to focus on what I do when I’m not studying.

In addition to studying at Lancaster University, I also co-run its award-winning television station LA1TV. Established in 2008, LA1TV is a prosumer (producer and consumer) ran, extra-curricular society which aims to bring entertainment to students, from students. Whilst this year we have not been able to do much in way of production due to social-distancing regulations, running LA1TV has still been an extremely rewarding experience for me as it has provided the opportunity to network and talk with all the other student-media societies, namely Bailrigg FM, SCAN (Lancaster’s student newspaper) and Take 2 Cinema within weekly meetings over Teams. During these meetings, chaired by the Student Union’s current Vice President Societies and Media, we discuss marketing strategies, opportunities for new members, potential campaigns we could run etc. All the while, ensuring the safety and security of a covid-safe environment just in case restrictions begin to lift and we are allowed to produce content again.

One of my passions throughout life has always been graphic design. Ever since being introduced to Adobe Photoshop at a very young age, I have been fascinated by the aesthetic and technique which goes into movie posters, marketing campaign posters, film and video game box art, desktop wallpapers.. the list goes on. When I am not studying, I like to practice my hand within Photoshop and learn these techniques, hopefully going on to do big things with it in the future. This ties in quite nicely with my next hobby, filmmaking.

Ever since watching Transformers as a young child (I know, I know..), I have been particularly interested in exactly what goes on behind the camera, both during production and post-production. That is where my love of filmmaking stemmed from, and why I am here today studying Film at Lancaster.

During my first two years at Lancaster, when I was not studying, I got involved with local filmmaking groups and tried to help out wherever I could, in the interest of creating something great through the power of collaboration. Something I have to show for this is a film I worked on called Wayward Station (2018), a short detailing a mysterious train station which only seemed to offer one way trips.

Whilst I have not been able to carry this hobby on throughout lockdown due to social-distancing rules, I hope to pick it back up again in the future. In the meantime, I have been scratching that itch through looking at new camera lenses and psyching myself up to use them when I can be on a film set again!

Well, lockdown boredom finally got the better of me during May of 2020, and I purchased a Nintendo Switch. I can’t deny it, it has been one of the best things I have ever spent money on – all your games are with you wherever you go! The two I have been playing the most in between my study sessions are The Elder Scrolls V: Skyrim, and Mario Kart 8. These two titles go hand-in-hand: Mario Kart is fantastic for playing with my flat as it offers a really handy split-screen multiplayer feature, and Skyrim is great for when you need to relax after being beaten endlessly at Mario Kart! (really – I could swear my flatmate is hacking the game).

Another one I enjoy playing during my spare time is, you might have heard of it, Minecraft. It blows my mind how Minecraft is eleven years old this year, I remember playing the first version like it was yesterday! Minecraft is one of those games you can never really quit, there’s always something bringing you back to it, whether it be the determination to find more diamonds or the desire to complete your house. I was actually bored enough during the first lockdown to actually build some of campus!

I have a love/hate relationship with cooking – I enjoy the prep and the eating parts.. but not so much the washing up. One of the biggest things I miss about home is the automatic dishwasher! All jokes aside, preparing a meal in your slow cooker during the morning and coming back to a cooked dinner during the evening is, in my experience, a fantastic way to motivate yourself to get through your studies for that day. It also makes the kitchen smell AMAZING. Seriously, if you’re thinking of going to University next year, get a slow cooker!

That concludes my list of things I do when I’m not studying! See you at the next blog. 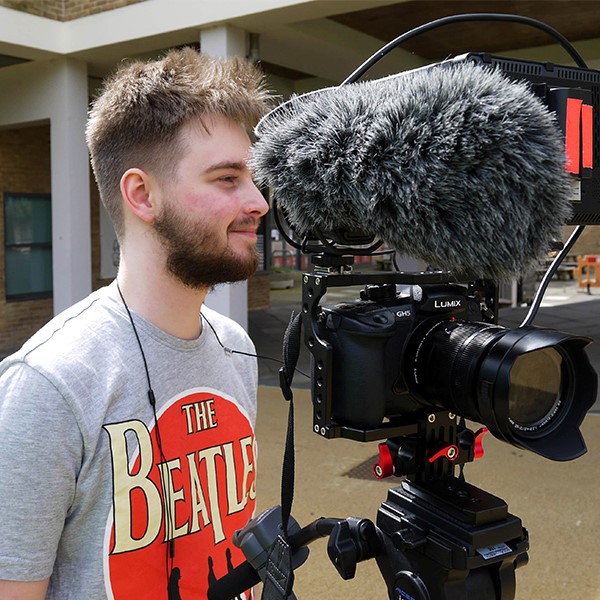 Alexandra Square, the centre of the University campus, built in Minecraft