The biosphere is by far the largest source of reactive trace gases to the Earth’s atmosphere. These compounds provide protection against abiotic and biotic stresses and allow plant-to-plant and plant-to-insect communication. Some of these compounds are highly reactive in the gas phase, and some are emitted in enormous, but unknown, quantities. The combination of high reactivity and large mass emission rates means these compounds play major roles in the physics and chemistry of the atmosphere. They mediate in the formation of ozone, hydroxyl and other oxidants, so controlling the oxidizing capacity of the atmosphere, which in turn controls the lifetime of methane and other radiatively-active “greenhouse” gases. They also form secondary organic aerosol (SOA) particles, which can directly influence the radiative balance of the atmosphere. SOA may activate cloud condensation nuclei (CNN), and by modifying cloud formation and properties can have indirect effects on climate. As well as their effects on radiative forcing, both ozone and aerosol particles have detrimental effects on human health and ecosystem functioning, and hence bVOCs play a role not only in the Earth’s climate system but also in air quality.

Over the last 25 years or so, my research on biogenic volatile organic compounds (bVOCs) has spanned scales from the cell to the globe and has included both experimental and modelling work. I was PI of a large NERC consortium project studying the role of bVOCs in atmospheric composition and chemistry above a tropical rain forest in Malaysia (the “OP3” project – see OP3 special issue in ACP and other papers, including our 2009 paper in PNAS). In this project we showed that large-scale land use change in the tropics – specifically the conversion of tropical rain forest to oil palm plantations – causes changes in atmospheric composition and chemistry. Using measurements and models we showed that the management of the emissions of reactive nitrogen species is essential to prevent formation of damaging levels of ground-level ozone in these regions.

In our paper in Nature Climate Change in 2013 we similarly showed that the large-scale conversion of farm land in Europe to the production of poplar or willow (now grown as biofuels) will likely exacerbate ground-level ozone pollution, with detrimental effects on human mortality and crop yields.

In 2013-2014 with NERC funding we measured the fluxes of the important bVOC, isoprene, at a remote site in Amazonia. We have obtained a unique nine-month record of isoprene fluxes and are currently writing this up for publications

In 2013-2014 we also developed the ability to measure hydrocarbon fluxes from the surface to the atmosphere at the landscape scale using a mass spectrometer on a light airplane (the NERC ARSF Dornier 228). We flew over London and SE England and obtained the first airborne flux measurements of benzene, toluene and isoprene in Europe - see publications in Atmospheric Chemistry and Physics

In 2016/2017 we measured the fluxes of VOCs (both biogenic and anthropogenic) from a tall tower in Beijing. This activity is be part of a very large NERC and Chinese funded project studying air pollution in Beijing. In 2018 we made the same type of measurements in Delhi, in a large UK (NERC)-Indian collaborative project. These data are currently being worked up for publication.

Our list of bVOC emissions from plant species, originally compiled in 1992 and periodically updated (but by no means comprehensive or up to date), is available here: http://www.es.lancs.ac.uk/cnhgroup/iso-emissions.pdf.

CLIMATE-SOCIETY FEEDBACKS AND THE AVOIDANCE OF CLIMATE CHANGE

I have become very interested in how both individual actions and societal choices might influence atmospheric composition and hence climate. Having discovered the work of William Jevons and his paradox (his 1865 book “The Coal Question” is available on the web) I have been collaborating with my colleague at Lancaster Andy Jarvis on climate–society feedbacks and the avoidance of climate change. In our 2012 paper in Nature Climate Change we showed that effective climate mitigation will require establishing a meaningful climate-society feedback to arrest the growth in global CO2 emissions through decarbonising global primary energy sources.

With my colleague Mike Berners-Lee of Lancaster University and Small World Consulting Ltd, I have been looking at how much food is grown in the world and where it goes to. We have arrived at new estimates of the inefficiencies of meat and dairy production and how changing diets away from meat consumption is necessary for global food security. In 2018 we published a major paper on this subject in the journal Elementa.

We have also quantified the effects of realistic dietary choices on greenhouse gas emissions and we have published two papers in Energy Policy on this topic. It is clear that there are very substantial climate-related benefits to be gained from adopting a vegan (or, to a lesser extent, vegetarian) diet.

I am a Royal Society Wolfson Research Merit Award holder.

CASE: On line detection and diagnosis of plant damage and stress by herbivores and pathogens
01/10/2011 → …
Research 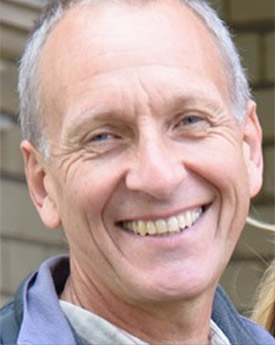