Peter Checkland gained a First in Chemistry at St. John’s College, Oxford, where he was Casberd Scholar, before leaving to join what was then a new science-based industry: making wholly synthetic fibres – nylon, polyester and polypropylene. He joined ICI, then the UK’s largest industrial company, and spent 15 year there, working in Research and Development. When he left the company he was manager of a 100 strong group engaged in process and product development.

He joined the new university at Lancaster in 1969, appointed second Professor in the postgraduate Department of Systems Engineering, started by the statistician Professor Gwilym Jenkins. Jenkins asked Checkland to establish a research programme for the Department. They both believed strongly in practical ‘action research’ in real world situations outside the University, and Checkland led the research programme which ran for 30 years at Lancaster. The programme capitalised on the fact that the average age of students on the one year masters course was around 30, making possible work in outside organisations which could not have been done with fresh graduates.

The research programme sought a new way of tackling the kind of problem situations which managers of all kinds, at all levels, face from day to day in their professional lives: ‘wicked problems’ which are never static and are subject to multiple interpretations. The outcome was the approach known as Soft Systems Methodology (SSM), a systemic process of inquiry into problematical situations in order to define and take ‘action to improve’. SSM is now taught and used around the world and is the source of the paradigm shift from ‘hard’ to ‘soft’ systems thinking. In the latter it is the process of inquiry which is created as a learning system. The human situation addressed is not assumed to be ‘a system’. The inquiry is structured by questioning the situation using models of purposeful activity built according to declared relevant world views.

Peter Checkland’s work developing SSM is described in many papers and in five books, all of which have been reprinted on average every 18 months since the first one, the classic Systems Thinking, Systems Practice was published in 1981.

The body of work has attracted many external honours. These include, among others, four honorary doctorates (from City University, The Open University, Erasmus University in the Netherlands, and the Prague University of Economics), the Beale Medal of the Operational Research Society, the Gold Medal of the UK Systems Society, and the Pioneer Award of the International Committee on Systems Engineering (INCOSE). Peter is also one of the first four Fellows appointed by the Omega Alpha Society, so named to advocate thinking about the end before thinking about the beginning.

Peter Checkland has retired from full-time employment at Lancaster University but continues his research and write. 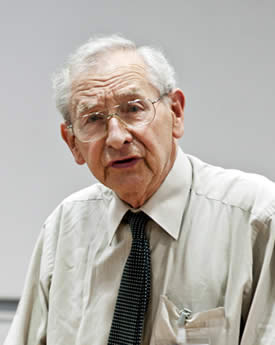