Alastair Campbell: winners and how they succeed

Alastair Campbell, director of communications and strategy for the Blair government from 1994 – 2003, will be giving a guest lecture in LUMS on 13 March, revealing the behaviours and mind-sets common to top politicians, sportsmen and entrepreneurs.

Alastair willbe focusing on highlights from his recently published book, “Winners and how they succeed”. A Q&A session will take place at the end of the lecture, and an opportunity to purchase a copy of the book at a reduced cost, will be available to all attendees.

Alastair Campbell was born in Keighley, Yorkshire in 1957, the son of a vet. Having graduated from Cambridge University in modern languages, he went into journalism, principally with the Mirror Group.

When Tony Blair became leader of the Labour Party, Alastair worked for him, first as press secretary, then as official spokesman and director of communications and strategy from 1994 – 2003. He continued to act as an advisor to Mr Blair and the Labour Party to 2005, during the election campaign. He now splits his time between writing, speaking, consultancy and charity, as chairman of fundraising for Leukaemia and Lymphoma Research, and is an ambassador for the mental health campaign, Time to Change.

To reserve a place at this lecture please register at: 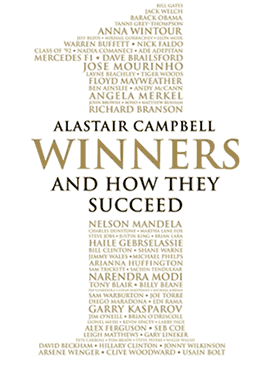