Jean Argles likes to say yes. When we invited the first ever Careers Adviser at Lancaster University to come back and tell us what it was like right at the beginning, she jumped at the chance. But then, that is how she ended up taking the job in the first place.

“I looked back at my own career before coming here and added up 17 jobs in 7 countries between the age of 18, when I started in the war working on codes and ciphers, to the age of 40, when I finally settled here at the University. Seventeen jobs before choosing one...but on the whole, my unusual background was an asset.”

Jean’s background is colourful to say the least. Her CV includes everything from top-secret espionage to medical social work, with secretarial stints for UNESCO and the government of Malawi thrown in for good measure. She was working for a charity campaign in London when she heard that a new university was being built at Lancaster. In the summer of 1964, she wrote a letter asking if there was any interesting work going – and was rejected. But a few days later, her luck changed and the then Vice Chancellor, Charles Carter, offered her a position as a fundraiser. One year later, he suggested a new challenge.

“He was not a man to say no...he was interested in experimenting. He said, ‘We ought to have some kind of careers advice...Would you like to try being an adviser?’ The position was never advertised, but he offered me the job. I had to go to another university to find out what I should do. I didn’t even have a degree – they were horrified!”

She promptly threw herself into it, and never looked back. Eventually she met and married her late husband Mike – a librarian who started at Lancaster before the University was even completed. The couple retired in 1980. Jean attributes her long and successful career at LU to Carter’s vision.

“We were lucky in that Charles Carter realised the opportunity. He said ‘Look after the ones who are failing. Don’t worry too much about the successes.’”

Jean’s approach to careers advice is based on personal relationships.

“I used to say I must have at least an hour for the first meeting. If you’re meeting a total stranger, you’ve got to establish a relationship first. What makes them tick? You have to get a feeling for the person to understand their ambition. So a personal relationship is crucial. Who is this person? And not just what are they studying...”

She remembers her students fondly, especially the ones who had no clue how to go about finding satisfying work.

“There was one student...our revolutionary leader! He led all the protests and got involved in all the causes, but he had no idea what he wanted to do. He did try one or two companies who had jobs going, but he never got to interview. And then one day he shouted out to me, ‘I got one!’ and it was because he finally wore a jacket!  But I liked him, because he was interested and he listened. The very studious ones, who knew exactly what they were going to do because their headmasters had told them – I thought they were rather boring. They didn’t interest me.”

As fascinating as Jean’s stories are, she also had questions of her own to put to the current Careers Team. She asked the assembled group – about 20 professionals from both the LUMS CAER Team and the Central Careers Service – about the biggest challenges they face, nodding in recognition when LUMS PG Careers Coach Martine Cooksley mentioned unrealistic expectations.

“If you want something, it is up to you to go and find it – to use your initiative. I always used to say, you know you better than I do, so only you know what you are capable of. It’s like teaching a dog to swim. Once they’re in the water and have got the confidence, then they can swim away from you.”

And though she was pleased to learn about the much-expanded services on offer – a far cry from her one-woman operation back in the 1960s – Jean believes the same spirit is at work in today’s university.

“LU was always very flexible, very new and progressive –there was very little distinction between staff and students. The staff knew their students – it was friendly. And I think that’s true today – there is a certain sort of warmth.”

One of the most visible changes is the number of women attending university. Jean herself remembers her brother being sent to Oxford, while she and her sister were not expected to be academic. But she has spent a lifetime – an astonishing 90 years – proving women can do anything they set their minds to.

“I always more or less ignored the restrictions on women. Women have to make a bigger effort – but if they have the enthusiasm, if they can sell themselves, it is possible. You have to get over the ‘only a woman’ attitude. I told my students, if you want something, you can get it. Don’t be defeated. We’ve got to break through...and it works – I mean, look at the number of women in this room.”

She beams at all of us, and settles down for a coffee and chat with acting Director of Employability, Louise Briggs. When asked to pose for a photo for our website, the answer is of course - what else? – an enthusiastic yes. 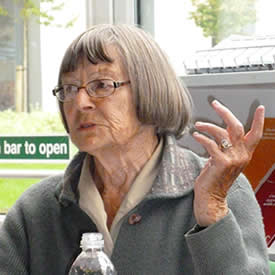