LUMS students have collected a grand total of £2,149.11 for a number of charities, raised through a series of entrepreneurial challenges.

Fundraisers included 160 students from the first year Entrepreneurship modules, who worked in 29 teams, and the MBA class.

Students were given two hours and a starter fund of either £1 or £5 and given the instruction to make as much profit for their chosen charity as they could.

The undergraduates raised a total of £1,553.74 for a number of different charities, while the seven teams from the MBA class raised £595.37 for Rosemere Cancer Foundation. Students worked on different projects, including selling Chinese New Year lucky charms, Valentine’s cards and running a table-tennis tournament.

A prize was awarded to Josie Hull, Melicia Chivers, Hou Meng Tam and Orber Soares Bom Jesus who raised the most money in their project; £137 for Send-a-Cow. The team used their skills to get for free a pair of trainers which are highly desired by collectors, which they sold on ebay via an auction.

Josie said: “I loved the chance to try venture creation for myself and see not only how difficult and stressful it can be but also how rewarding it is when you succeed.  Seeing how you can create something successful out of nothing just by bootstrapping and being resourceful was so inspiring. We managed to make a £137 donation to a charity and make a real-life impact all from an idea we had only two weeks prior. It has taught me the importance of networking and using any contacts you may have or could make to your advantage.”

Naomi Lee, Matthew Berry, Gonzalo Salazar, Lydia Li and Andrew Quigley also received a prize for the most creative project, after they dressed up as bananas on a hot day and sold ice pops in Alexandra Square. They raised £30.05 for The Brain Tumour Charity.

Naomi said: “In lectures I am just learning about the theory alone, without having to actually apply it to real scenarios. However, during this challenge I was able to use what I learnt in action, and then reflect on the processes. This enabled me to learn a lot more than just in the classroom because by actually doing it I can remember more.”

Lecturer Magnus George, who organised the Entrepreneurial Challenge, said: “The challenge gave students a taste of the reality of having to make sales, deal with unexpected events, negotiate with suppliers and manage teamwork under tight constraints.  Despite the small sum of money and the short trading window, students used some very creative approaches to exploit opportunities thrown up by the calendar.

“This activity has, in a controlled way, brought to life many of the key concepts of entrepreneurship including managing risk, recognising opportunities, testing a market and using all of your resources – not just financial ones – in order to serve a market.  Most importantly, students felt the fear of failure and had to deal with it.”

Reflecting on the exercise, students felt that the challenge had been a great experience.

Ragnar Morkore said: “Actually putting theory into practice is a very enlightening process that really helps in learning, and doing this project made me realise that entrepreneurs learn by trial and error.  Trying something even if it fails can be a very rewarding experience if you reflect back on it and learn from the mistakes and do better next time.”

James Fletcher-Adams said: “After university, entrepreneurship and being an entrepreneur is very practical, so it is important that students get first-hand experience whilst at university rather than making costly mistakes in the future.”

A number of Lancaster’s Entrepreneurs in Residence came to watch the students’ presentations, in which they discussed the projects.

Mike Gray from 1st Stop Group was “hugely impressed” with what he saw, saying: "The students' proposals were well thought out, well researched and I especially liked the way they came up with their ideas and as a team agreed consensus of the way forward and then executed brilliantly.”

Former owner of Omega Holidays Susan Sykes said: “"The student teams combined the irrepressible enthusiasm of youth with budding business acumen. I would have certainly backed a number of their appealing entrepreneurial ideas!"

Managing Director of Boatbridge Philip Coatesworth said the exercise was “a really impressive way of condensing so many of the joys and pratfalls of entrepreneurial life into a genuine learning experience. It was a real pleasure to witness in students’ faces the enthusiasm and energy, which had been brought to bear in their various challenges.”

Glyn Jones from Lancashire Care NHS Foundation Trust said: “It was very uplifting to be part of the energy that the teams created to pursue their plans which was evident in their presentations. The variation in approach and solutions highlighted the level of creativity developed in the cohort. Their “get up and go” spirit and flexible response to live running their plans saw all of them succeed in growing their £5 investment.” 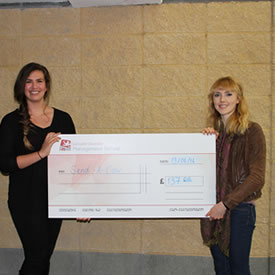 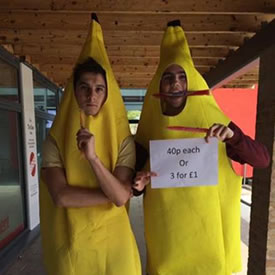