Former Government communications chief Alastair Campbell talked about mental health and themes from his new book on ‘Winners’ during a visit to Lancaster University.

Mr Campbell, who was Tony Blair’s Director of Communications when Labour was in Government, talked to a packed lecture theatre in Lancaster University Management School on Friday 13 March, about his mental health breakdown, which happened when he was a Fleet Street journalist. Mr Campbell is a supporter of the 'Time to Change' mental health campaign.

As well as talking about some of the high-profile personalities he had interviewed for his book, Mr Campbell, who was talking to an audience of students, academics and representatives of business, stressed some of the key characteristics required to win in business.

“Strategy is good but a lot of businesses do not understand strategy,” he said. “Leadership is becoming more and more important but at a time where there are fewer and fewer good leaders – and that is dangerous.”

He also stressed the need to constantly innovate in order to win and the importance of teamwork. 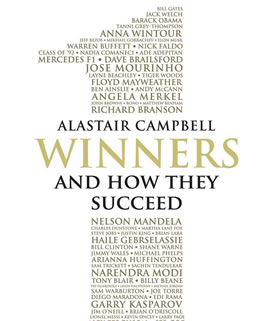