On the front line of the fight against disease

The transition from the laboratory to Lancaster University Management School gave Richard Lumb an intense lesson in the thinking power generated when different cultures meet. Now, he is applying that idea to his mission to speed up advances in the world of genomics.

Richard is the founding CEO of Front Line Genomics - which organises conferences and events on the subject all over the world.

“Genomics refers to the study of an organism’s entire genetic makeup, called a genome,” he explains.

“Variations in the genome can contribute to the cause of diseases, such as cancer. Therefore, studying the genome can help us understand, treat and predict diseases with unprecedented accuracy.”

Richard still remembers the impact of walking into the lecture theatre at Lancaster University Management School for his first session as a new student on the Management MSc course and being met by a sea of faces from every corner of the world.

“It was so unexpected,” he remembers. “I’d just finished a PhD in cell biology and felt a bit like a fish out of water. All of a sudden I saw the opportunity to work with smart people from all sorts of cultures and perspectives. It opened up my mind in such a powerful way, that later I realised I could apply the same approach to what I am now trying to do in genomics.”

Front Line Genomics - which Richard set up in 2013 - is what he describes as a “commercial enterprise with a social conscience”. Its focus is to bring together diverse groups interested in genomics who do not normally talk to each other, including medical researchers, clinicians, industry, charities and people whose lives have been adversely affected by their genetic makeup. The aim is to cut the time it takes for genomic breakthroughs to benefit patients.

He had no thoughts of genomics when he arrived at Lancaster fresh from completing his PhD in Biochemistry/ Cell Biology at Manchester University. He simply wanted to learn more about business and find out how to use science in a commercial context. Then, in 2009, his father died of mesothelioma - a form of cancer caused by exposure to asbestos - and his life plan changed.

He read around the condition and found out about a genetic mutation called BAP1, which increases the chance of mesothelioma sufferers dying from it by a factor of 10. Suddenly, he wondered how the outcome of their diseases might have differed if patients had known whether or not they carried the BAP1 mutation.

“Here we have a technology that allows people to understand about their own bodies and can affect the decisions they make when they are ill” he says.

“It might also affect whether they decide to expose themselves to certain working environments - like my father might have been able to do about asbestos had he had the information.”

Here was Richard’s opportunity to bring science and business together in order to benefit future patients, and here was where what he had learned at Lancaster really came into its own; the figure of his lecturer in project management, Ian Cammack, standing out in his mind.

“Ian Cammack was inspirational,” he says. “Working with us in small groups, he talked about NASA and other cool projects in such a practical way that he got us thinking about running something much bigger than a corner shop. People from different cultures and perspectives were working together and I often found myself mediating those discussions. That was such a strength of the course.”

He left Lancaster unsure what to do - except that it would not be academia - and had taken on a number of short-term projects to help him decide, including working in Tesco’s financial services, on project and department management in Sainsbury’s and running a speed dating franchise, which he says “was a great chance to put Lancaster project management ideas into practice”.

His CV was spotted by IntertechPira, which gained him a job as a conference producer. He was working on 10 events a year, of which half were in life sciences, bringing him important drug company contacts. He developed further links and experience with conference organising companies Terrapinn and Hanson Wade. He also picked up financial backing from Clarion Events, which enabled him to set up Front Line Genomics.

True to his inspiration from Lancaster, Front Line Genomics is working to bring together people from the worlds of academia, industry, healthcare, government and the investment community, plus members of the public. The organisation produces publications highlighting technological advances for clinical staff, a bi-monthly magazine aimed at all relevant groups, and puts on conferences.

These are called “festivals”, because they are designed to be fun, to be affordable to anyone interested and to draw on ideas from diverse sources. A commercial, rather than a charity, model was the only one that would achieve Richard’s aims fast and efficiently. The first festival took place in Boston, USA in 2015, followed by another in London in January 2016. More are in the pipeline.

He feels that although knowledge of genomic medicine is substantial, it is not accessible to everyone in all areas, and in many cases the treatments don’t exist to deliver a satisfactory outcome for patients. He wants this to change.

The biggest barriers to patients receiving genomic advances are the way that clinicians are trained, and the capability of healthcare organisations to fund and implement necessary advances.

Richard realises he has a challenge ahead to make progress, but his festivals are causing excitement in the genomics field, because groups are being given the means of communicating with others they have never met before. That way lies success, he says: “As my whole life experience was opened up by Lancaster, so we want to do the same with the genomics industry.” 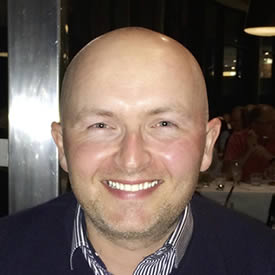