Paul Taylor: From fencing to finance

It could be argued that Paul Taylor, President and Chief Executive of leading global ratings agency, the Fitch Group, owes his job to fencing. He is sure that what he learned in captaining Lancaster University’s Fencing Club as an undergraduate gave him his first stab at a job in finance - a world he still finds fascinating.

Paul (BSc Management Science/Marketing 1980-83) vividly remembers himself as a third-year student, bleakly realising he had missed the graduate recruitment Milk Round and his uncertainty about an interview in Liverpool with Lloyds Bank: “It soon became clear that the regional head of Lloyds was also a keen fencer and I’m sure that’s why I got the job,” he says.

In the post-financial crash world, attracting the right kind of people into the business, who are not only competent but can also communicate complexity, is something Paul feels is vital. The importance of getting the balance right between academic abilities and soft skills is crucial to success at the top of the financial sector.

“A lot of it is about being personable,” he says. “I've seen lots of people over the years who are incredibly well-qualified academically, but they lack that interpersonal ability, or that ability to stand up to a group of people in a room. Having those kind of soft skill abilities are really important to us.”

Paul was keen to come back to address students at the Management School in March 2015 and recalled his three very happy years there.

As a teenager from Maidstone Grammar School, his decision to come to Lancaster University to study marketing was driven by the desire to have “a nice car”. Taylor figured it would be a good career choice and Lancaster (then as now) enjoyed an excellent reputation.

He loved Lancaster and the beauty of the campus, where he was a member of County College. He led the university fencing team in competitions all over the country and made friends for life. As captain, he developed leadership and tactics, and the ability to hold his own, make fast decisions and get on with a team under pressure. These skills - together with a robust financial knowledge base - have powered him to the top of his profession.

Paul also enjoyed the rigour and variety of his studies - particularly the marketing sections. However, try as he might, he could not land a job with a large marketing company, so he tried banking.

Following his interview with the fencing enthusiast, he secured his first job in a retail branch of Lloyds in Croydon. There, he had no thoughts of a career in a ratings agency. However, three years at Lloyds (during which he won the United Banking Fencing Trophy) and five years in the Japanese Tokai Bank introduced him to the fascinating, and unknown, world of financial ratings.

In 1989, he joined the ratings agency Standard and Poor’s as an analyst, and has never looked back. Still in his 20s, he found himself with access to the likes of the chairman of Barclays Bank. The world of ratings was, for him, intellectually-challenging and collegiate and gave him a chance to shine.

Ratings became a fascination for him. After six years rising through the ranks at S&P, he accepted an offer from a small US-based ratings agency, Duff & Phelps Credit Rating Co, to set up a European business for them. When the firm merged with Fitch in June 2000, he began a swift ascent through the company ranks. Beginning as Head of European Business, his rise culminated in 2012 with his appointment as CEO of the $6.5 billion Fitch Group, employing 3,300 people.

He says that the 2008 crash took everyone by surprise. "None of us knew what had hit us,” he says.

Paul was asked by the Fitch Group to undertake what he terms a “mea culpa tour” of the world, visiting big institutional investors. There he was often met by anger from stunned companies, who felt that the financial world had not been open. What he heard has given him a wide-ranging understanding of what went wrong.

“It is important that young people going into this business understand what can go wrong,” he says. “There has been no more fascinating, albeit painful, lesson than the financial crisis. One important one is a basic principle of risk analysis - if it looks too good to be true, it probably is.”

He cites over-specialisation, over-complexity, an over-reliance on risk-based financial models at the expense of scenario-based ones and a failure of businesses to share knowledge, as some of the important lessons to be learned from the crash.

The crux of the problem though, in his view, is far more prosaic. He says: “People got so caught up in the day-to-day that they failed to see the bigger picture.” 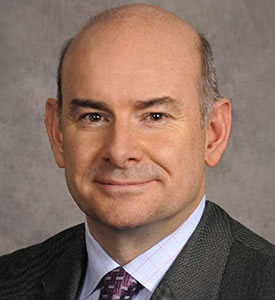 It is important that young people going into this business understand what can go wrong. There has been no more fascinating, albeit painful, lesson than the financial crisis.