Emeritus Professor Alan Mercer, a founding member of Lancaster University and of the Department of Management Science, has passed away, following a stroke.

Alan was 82 years old. In 1964, when Alan had the chance to start the Operational Research Department at Lancaster with Pat Rivett and Mike Simpson, he could not resist the challenge of seeking to bridge the gap between Industry and a University. This focus was to the fore throughout his career here.  He formally retired in 1998, though, after retirement, he came to the University every week until all his doctoral students had obtained their degrees, and continued to lecture on the MSc in Operational Research for a decade. Until very recently, he chaired most of the Department of Management Science PhD vivas. Last September, he closed the Department’s 50th anniversary celebrations with a lecture of reminiscences which several of the alumni present regarded as spell-binding.

Alan Mercer began his career in 1954 in the National Coal Board, before moving on after two years to the Atomic Weapons Research Establishment at Aldermaston, where he did early research on the generation of pseudo-random numbers for high-speed computers and on stochastic process approximations to nuclear reactions, leading to the probability distribution of the size of an accidental explosion. During his Aldermaston period, he wrote his PhD thesis ‘Some Stochastic Processes Analysed by the Method of Supplementary Variable’ and published papers on queues and renewals in the Journal of the Royal Statistical Society.

In 1962 he left to join the infant IT function at Armour & Co Ltd as the senior manager responsible for operational research, statistics and data processing, before joining Lancaster’s Department of Operational Research (now the Department of Management Science), the first of its type in the UK.  Alan soon became a professor and later led the department for many years, encouraging its staff to view OR as a practical discipline based on intellectual rigour and honesty. Amongst his contributions to the University was a very brief period in the mid-90s when he was the Head of the Department of Law!

During his career he made many contributions to OR in the UK and Europe. He became a Council Member of the Operational Research Society (ORS) in 1969. He was a founding editor of the European Journal of Operational Research (EJOR) and held that position for 20 years, insisting on the high standards that have led to EJOR’s excellent reputation around the world. He organised a very successful ORS conference in Lancaster in 1998. The ORS awarded him Companionship of Operational Research in 2010.

Alan was a distinguished researcher in his own right and, until recently, was one of very few UK researchers in quantitative marketing, writing the first book on OR in marketing and contributing to another on OR in physical distribution. He supervised numerous PhDs, many of whom have gone on to successful careers in OR in the UK and around the world.

In addition he has had an extensive public career which brought OR to the attention of policy makers. Included in such activities were his chairmanship of the then SSRC’s (now ESRC) Management and Industrial Relations Committee, his membership of the North-West Economic Planning Council and his chairmanship of the Warrington and Runcorn New Town Development Corporation. 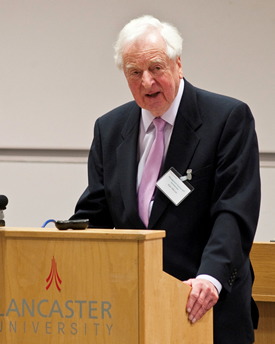