The road to Wembley

How BBA Management graduate Sissel Hartley is tackling the challenges of marketing women's football for the FA.

Football is no longer just for the boys. The London Olympics in 2012 brought new audiences to women’s football, and with more than 1.3m players nationwide, ‘the beautiful game’ is now England’s biggest female participation sport.

Getting women’s football even more firmly on the radar is the key priority for Lancaster BBA Management graduate Sissel Gynnild Hartley, who joined the Football Association (The FA) as Marketing Manager for women’s football in December last year. She had previously spent four years in brand management with Johnson & Johnson, her BBA placement employer, responsible for a portfolio of health-care products such as Listerine.

At The FA, Sissel faces a very different set of marketing challenges. From her base at Wembley Stadium, she looks after the marketing of the prime competition events: the FA Women’s Super League (WSL), set up in 2011 as the female equivalent of the Premier League, the FA Women’s Cup and the England Women’s team.

“I think there are a lot of assumptions that women’s football may not be as good as men’s football or the atmosphere won’t be as good,” she says. “But once people go and watch a League game, they think it is actually back to what football used to be about – you can get quite close to the players and the action. You don’t have a lot of diving or drama of that kind – just good old football, of a really high quality. I think that’s why we’re seeing such high growth in attendance.”

With tv coverage of the sport growing alongside year-on-year attendance at matches, The FA has this year expanded the WSL, adding a second division with a further 10 clubs. The League is run on a franchise model, Sissel explains:

“The 18 clubs in the WSL all sign a contract with The FA, and we then look after those clubs, meeting with them on a monthly basis. I go through the marketing activity, and create the overall strategy for the League that they execute locally.”

Norwegian-born Sissel is a long-time Liverpool fan (Liverpool Ladies were 2013 WSL champions), and expenses-paid access to women’s league games across England is one of the perks of the job – as are priority tickets for other events that take place at Wembley.

“Marketing a product that people love so much is a complete joy. Whatever you are marketing, you get very involved in the product you are trying to sell, but it’s even better when it’s also something that you are personally very passionate about.”

She was therefore thrilled to be offered the role at The FA, against tough competition from others with the background in football that she lacked. “Having worked in FMCG marketing at Johnson & Johnson was pure gold, though – that’s what got me the job,” she says.

Her BBA training has played a vital part in giving her the versatility required to switch roles, and she singles out organisational skills, the ability to manage multiple deadlines, and teamwork as key aspects of her BBA that she has drawn on from day one: “The degree sets you up for a really great start in your career: it felt like I was moving from one working environment to another.”

She has another reason to be thankful she chose LUMS. Through her love of rowing, she met and has this summer married fellow rower Paul Hartley, a Lancaster Law graduate who now works in the City as a marine liabilities insurance underwriter. Sissel herself no longer rows, as the demands of work make early-morning training sessions on the river impractical, but working out in the Wembley gym at lunchtime, and also running marathons, ensures she keeps pretty fit!

For the foreseeable future, her life is very much here in the UK: “I certainly want to stay here and prove myself in this role and do my bit to drive women’s football forward. Hopefully I’ll continue to exceed the targets set, and I’ll be working towards a promotion, whenever that comes.”

Her advice to others wanting to work in football or sports marketing?

“Go out and get a solid background in marketing – and to be honest, the bigger and more well-known the companies you can work for, the better. Having just recruited for a marketing executive post which attracted around 400 applicants, I’d say the more you can do to stand out from the crowd, the better.

“Showing a real passion for the sport is important – and of course making sure you really do your research about the organisation and the position you’re applying for. Do all of that, and combine it with a First or 2:1 from Lancaster, and you should stand a very good chance.” 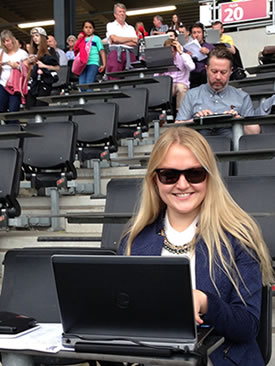 Marketing a product that people love so much is a complete joy. Whatever you are marketing, you get very involved in the product you are trying to sell, but it’s even better when it’s also something that you are personally very passionate about. 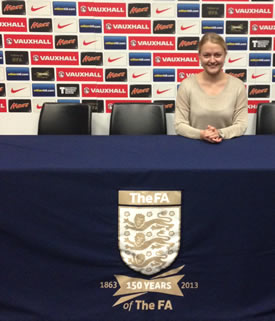