Unemployment is bad for your health

A new report from Lancaster University's Work Foundation shows how men suffer a double whammy from joblessness. Services are failing to address serious health problems that are aggravated by unemployment, hampering mens' chances of finding and retaining a job.

The report, Sick of Being Unemployed: The health issues of out-of-work men and how support services are failing to address them, from the charity Men’s Health Forum and The Work Foundation, Lancaster University, outlines the problems and offers solutions.

As the report shows, unemployed men, particularly those with previously unstable work and with a lower socio-economic status, have a higher risk of developing poor health as a result of being unemployed than other groups.

The report calls on the government to take action to prevent ill health and to address existing health conditions that are barriers to employment within back-to-work support services. Professor Geraint Johnes chaired an event on 11 June with Norman Lamb MP, Minister for Care and Support, which examined the problem and outlined the interventions that could begin to address it.

Care and Support Minister Norman Lamb said: “Mental health conditions can have a huge impact on people’s lives and this report highlights a major concern that men are being seriously affected by unemployment.

“I want to build a fairer society where people can get access to the support and treatments that they need to stay healthy. To see this happen we are investing £400m to improve access to psychological therapies which have so far helped over 80,000 people move back to work.”

A case study in the report on an initiative from Tomorrow’s People and the James Wigg Health Centre, a GP surgery in London, shows how integrated health and unemployment support delivered very real benefits to patients. The GP surgery agreed to have a Tomorrow’s People employment advisor based in its practice to offer support. Around 70% of those helped by the service were unemployed, 85% of whom had been out of work for six months or more. The results were positive both in helping people return to work (87% entered employment, a voluntary or training placement, or some form of education) and in improving health outcomes.

Martin Tod, chief executive of the Men’s Health Forum, said, “We knew ill people were more likely to be unemployed – now our new report shows that being unemployed makes men sick. Of course, unemployment doesn't just affect men, but the effect on health appears to be much greater amongst men than amongst women. The government must look at how ill-health in unemployed men could be prevented. Local councils must work in partnership with Jobcentres, health care providers and charities to tackle the toll of unemployment on men.”

Jenny Gulliford, policy and research officer at The Work Foundation and lead author of the report, said, “While the harmful effect of unemployment can be felt by both genders, there is evidence to suggest that men are overall more likely to suffer adverse health consequences than women, especially in the short term.

“With poor health often a barrier to returning to work, the government needs to take action if it wants to improve job outcomes. Worryingly, despite potential capacity in the Work Programme, it seems there is a lack of specialist support to either prevent poor health or to support jobseekers with pre-existing long term conditions or disability. A more innovative approach to tackling the health of unemployed men, including taking action at an earlier stage and a joined-up approach from Jobcentres and other agencies, must be taken to improve both the health and employment outcomes for men.”

Men can find more information on work, health and stress on the Men’s Health Forum’s website at www.menshealthforum.org.uk. 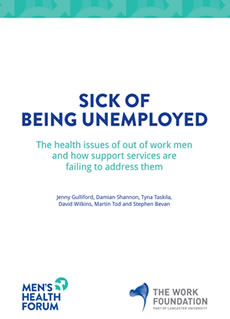 With poor health often a barrier to returning to work, the government needs to take action if it wants to improve job outcomes.