I am a creative technical innovator based in the School of Computing and Communications at Lancaster University. I work primarily on short lifecycle community-led digital technology innovation projects, which requires working with numerous multi-organisation stakeholders and a colourful variety of end users. In this work we use flexible and dynamic Agile working practices to engage with people to define research focus and iteratively produce prototype technologies. My primary responsibility is to lead the rapid development of prototypes leveraging (and sometimes hacking) a range of platforms and with teams of mixed ability and mixed discipline.

Recent projects include #Patchworks working closely with Signposts (a charity who work with the most disadvantaged and hard to reach people), MadLab (Manchester based DIY tech community) and Lancaster academics from across disciplines to co-design technology for social change. We built a low cost Raspberry Pi powered RFID enabled reminder system called #Pat to enable those with chaotic lives to get reminders from caseworkers on their own timescales. The process had impact far beyond the technical prototype developed - see: http://youtu.be/ydPcxuixhAw

As a spin out from #Patchworks the #Pat printer was re-purposed and augmented with RFID enabled Android handsets to run a treasure hunt for visitors to Manchester Science Festival at MOSI see: http://youtu.be/FyHwNL14Df4

Another project was activist tweets, where I worked with linguists to capture, recapture and process tweets in order to characterise the language of tweets which produce the best coverage through the twitter network.

Not just Pi in the sky: low-tech solutions for social innovation
Invited talk 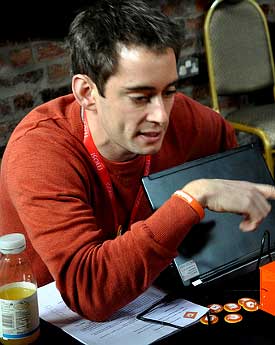